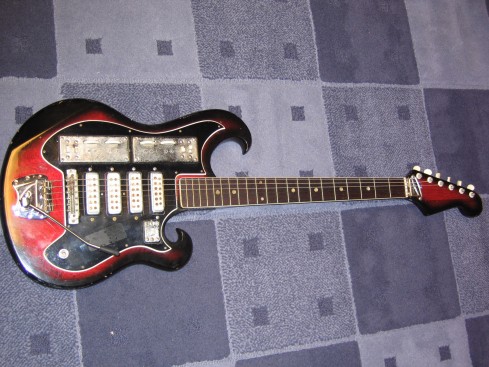 Oh boy, I miss this one!  I sort of wish I didn’t sell it but sometimes you just gotta let it go!  It now resides in a NYC art studio!  Anyway, this was a Craigslist find that turned out to be one of the few cool Craigslist discoveries I’ve had.  The original seller had a few blurry pics to look at, but once I saw four pickups, well, I just had to venture out to the boonies and buy this sucker!  Talk about bizarre, huh?  This guitar was in kinda sorry shape.  It only had a few pieces of the original trem left, and what was left had been messed with.  The wiring, jack, and most of the pots were shot, and the guitar was covered with stickers and autographs.  The seller said that the guitar was his brother’s, and said brother flew the coop and wasn’t coming back so the seller was “gettin’ rid of his shit!”  OK, so here’s what Dano and I did to this beauty!

Those exaggerated horns and the huge body style were just so awesome!  The guitar balanced pretty well and wasn’t “head-heavy” at all.  I still don’t know why I sold it! 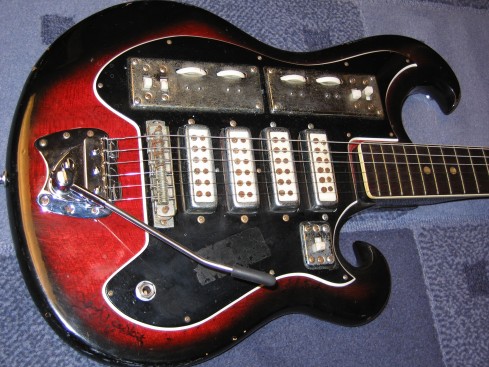 The binding was all intact and the bridge was useable.  The tuners were the standard open gear types and it held a tune OK.  Still don’t know who made this one but one day I was searching through some old catalogs and found this exact model, I believe it was from 1966-68 range.  I found out it was called the Sekova Mentor.  In 1967 list price was $149, and it was the most expensive guitar in the catalog.  Here’s what they said in 67:

Dontcha just love those old ads?!?!  I wonder what other brands cost in 1967?  $149 seems a bit pricey for the times?  I know Sekova and Kimberly guitars are sort of related, and I’m pretty sure Kawai made the Kimberly guitars, so on a hunch I’m going to say this was Kawai made.  I’m not 100% sure though. 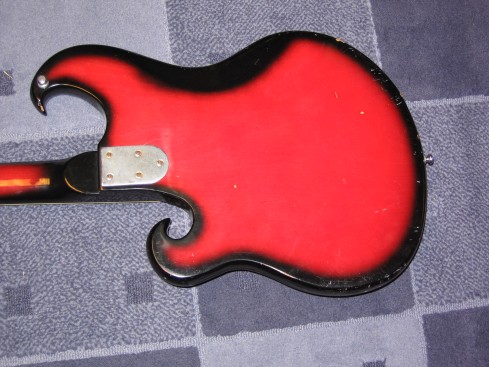 I know a lot of guys can figure out the maker by looking at the neck plate, and this one has that “tombstone” neck plate I’ve seen on some other Japanese guitars.  And check out that red burst finish!!!  Lovely! 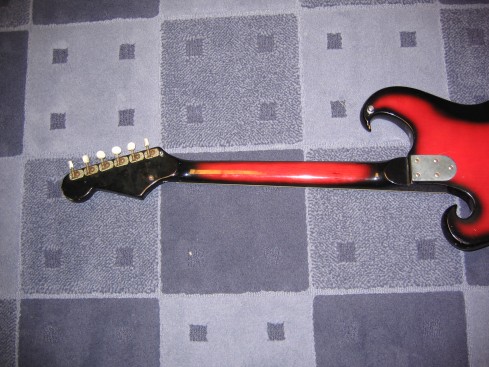 I suppose what I miss most about this Japanese beauty is that I’ve never seen these pickups on any other guitar.  Who knows, they’re probably the same as a bunch of others, except for the covers.  I’m all about weird looking pickups!  C’mon people, add your knowledge! 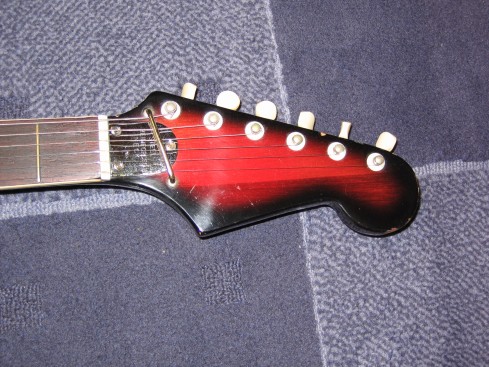