(Scroll all the way down for the video demo!!)

Oh my, I had so much fun researching this guitar.  There is almost no information regarding this strange Japanese model and my journey really took me into the bowels of the internet to uncover this rare beauty.  Maybe “bowels” isn’t really a great term, but hopefully you get my drift!

At first I thought this was a typical import, probably sold through RCA record stores in the late 60s.  I know that there were a few guitar brands like Atlas, Baron, and Royalist that were sold in these RCA stores back in the day, but this guitar was just a lot weirder than your typical Japanese import from the era.  Once again, I’ve never seen anything like it, and if you’ve read my posts you know I’m all about guitars no one knows anything about!

Anyway, about this guitar.  The body design and shape, the pick guard, the pickups, the electronics, the headstock, the bridge, hell, just about everything on this guitar is unique to this model.  Here’s a quick rundown:

So here I had a guitar unlike anything I had ever seen before, and I needed to find some information.  Now, here’s where I got a little creative and enlisted the services of a kind grandma!  Yep, that’s right.  A grandma who spoke Japanese.  If I detailed the strange turns this story took you’d probably call me out, but trust me when I say it all started with a scan of an old 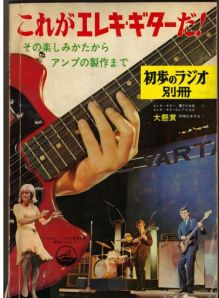 advertisement.  I don’t even remember how I found this but in my searching it sometimes gets late in the night and I just end up in strange places, sort of like the way it was for me in my early twenties! Anyway, I now had proof this guitar was a production model, but I needed some help with my Japanese.  And so it goes, I find another ad and through a friend of a friend of a friend of a grandma I find out that this guitar was called the SG-18.  Once I had the model name, it all started falling into place.  The Victor Company of Japan started in 1927 and is usually referred to as JVC.  It began as the Japanese subsidiary of the Victor Talking Machine Company from the USA.  Then in 1929, ownership was transferred to

RCA Victor.  So in the 1930s JVC produced records, radios, and televisions in Japan.  Of course during WWII JVC severed it’s ties with all outside companies, but JVC continues on to the present day.

Apparently, the RCA partnership with JVC (who was now owned by Panasonic) reignited in some form in the early 1960s during the Beatles boom heard ’round the world and the ensuing electric guitar explosion that followed.  It seems that for a time these RCA Victor guitars were looked at as some sort of a myth in Japan since JVC was only known as an appliance and electronics manufacturer, and certainly not a guitar maker.  Now, I don’t think JVC actually made this guitar.  I’m fairly certain that it’s a Matsumoku made guitar, but made with some JVC parts, design specs, and serious Fender influences.  This was about the same time Teisco and Guyatone were exporting guitars, and JVC apparently saw an opportunity.  One thing I’m not totally sure about was if this SG-18 was made for the domestic Japanese market or if it was made for export?

So I’m guessing in late 1964 JVC started coming out with two guitar models, an entry level SG-12, and the professional model SG-18.  Apparently there was also a “Columbia” branded model produced at the same time.  The entire model run seemed to only last a few years, and these guitars are very rare, even in Japan.  Here are some pics I found of the various models. 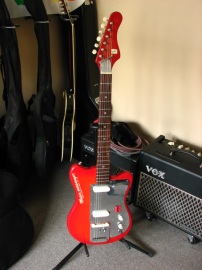 So these SG-18s came in at least two colors, sunburst and redburst.  Notice the odd switches at the top of the pickguard, and the volume and tone knobs.  Kinda’ neat.  Then there are pics of the SG-12, which was the entry level two pickup model.

There are some subtle changes with the two models but on the whole the guitars share many similarities.  So there you have it!  That old RCA logo on the headstock had me all interested when I first saw this guitar, and man I feel lucky to own one of these bizarre beauties!  Thankfully, my SG-18 came with the original case.

Now check out this guitar in action!!  Wow, it sounds so goooooooooooood!  Mike Dugan is THE MAN!!