This is the second article regarding Dan Auerbach guitars, and no, this one was never owned by him!  But he does own an identical model and Dan used his three pickup Lexington a lot during the “Brothers” album era.  When Dan was playing his Harmony guitars, I kept wondering if he would ever discover these Valco guitars, and I was happy to see him start using them around 2010!  These Supro Lexingtons often really sound bad since they were wired with so much filtering.  It seriously looks like amp wiring under the pickguard!!  But, I’m getting ahead of myself!

Let’s start with some facts, and with this little tidbit:  This Lexington was my first Valco guitar, and it’s one of the few guitars that I own that came to me bone stock mint in the case with all the original accessories!!  I’m not really big on “case candy” as it were, but believe me when I say this guitar was like a time capsule straight from 1968!  Oh, and one more thing!  If parts of this article read familiar, like from a certain forum posting or article, don’t fret. I wrote a lot of articles years ago about these Lexingtons, and most, if not all, of the early Lexington information was written and published by yours truly.  I don’t plagiarize, promise!
Ok, so the Supro Lexington was one of the last models to ever be produced by Valco, since the company had “merged” with Kay around 1967and both would soon be out of business in a few short years. The Lexington models look very similar to Fender Jaguar/Jazzmaster body shapes, but these Supro’s are much thinner at the “waist” than their Fender counterparts.  40 1/2″ long by 13″ wide.  24 3/4″ scale. They came mostly in “lustre rubbed” sunburst finishes, although slight variations in components (like tremolos, pickup covers) can give away the year of manufacture.  These guitars don’t have nitrocellulose finishes.

The Lexington first appeared in late 1964 and disappeared in the late 60’s, as did most everything that was Valco.  These models were initially referred to as “shaded” guitars and were available in one, two, or three pickup models.  Model designations were:

Cases were an extra $50 at the time.  Prices remained the same until they went out of business, but the model designations did change to S625, S635, and S645.  The earlier models sported a tremolo system very similar to old Hagstroms of the time, whereas later Lexingtons had a slightly more sophisticated, but not that great, chrome trem with “roller” bridges and a chrome cover plate.  Most definitely of Japanese origin.  It’s also important to note the “sharing” of parts on many late 1960s off-brand guitars.  Just like the Italian guitar makers of the 60s were being squeezed out of the market by the Japanese makers, so too were the US manufacturers.  In both cases, Japanese parts began to appear and be used on domestic models.  Definitely a sign of things to come!  I’ve even seen these Lexington bodies/necks with Japanese pickups, STOCK!!  Apparently some company was using up leftover stock as late as 1973!

Pickups were the standard Valco models, which were single coils “disguised” as humbuckers.  Early model Lexingtons had some sort of gold foil/mesh on part of the pickup covers, whereas later models had the simpler chrome covers without any adornment.  Part of the magic of these Valco guitars is the pickups!  They were patented in the 1950s and designed by a Mr. Ralph Keller (check out the patent information if you’re a real nut), and I think we all owe Mr. Keller a debt of gratitude.  No other pickup design is like his, and if you peek under the covers of these pickups, you’ll notice that the magnet lies next to the bobbin, rather than stacked under it.  I think there’s something to do with that magnet’s position and it’s magnetic pull on the strings that gives these pickups some kind of interesting, unique tone.  Plus, most all these Valco pickups read out really HOT!!  That can’t hurt none neither!!  On mine the bridge reads out at 8.55K, the middle at 8.54K, and the neck at 8.94K. 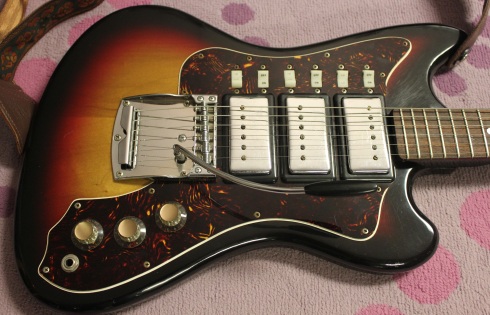 Bodies were made of solid wood (alder?) as were the “thin-line” necks, which included a non-adjustable “Kord King” design which were guaranteed never to warp or bend!  What that means is that Valco used an aluminum rod in the neck, but it’s not adjustable!  I 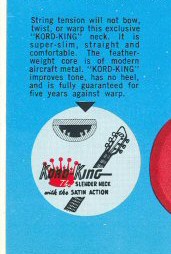 suppose it sounded good at the time, but once these necks became warped, they are just about done as playable guitars. The Supro logo was a sort of clear sticker applied to the headstock, above the finish.  Neck has a zero fret, one plastic string tree, and VERY NICE old Kluson Deluxe tuners were found on the two and three pickup models.
Frets are vintage sized, meaning small.  Brazilian rosewood fretboard.  Electronics had a volume knob for each pickup, and two rocker switches for each pickup.  One is a simple on/off switch, and the other is a hi/lo tone switch.  All electrical components are of very high quality and wiring/soldering is pretty darn good.
The pickups are mounted to the body and don’t leave too much room for height adjustment.  Black pickups rings are there for show only.  Body is routed on either side of the pickup mounting “block”.  The pups aren’t necessarily calibrated for the neck, middle and bridge positions, and changing them around is kind of a pain.  The rocker switches are sort of cool as you can have any combination of pickups, but can be hard to maneuver around.

The only rub I have against this guitar is the wiring schematic.  In order to have the tone controls on the rocker switches, Supro employed a dizzying array of capacitors that basically suck the sound of these pups.  At the time they called it “tone-shading”, but the design really destroyed an otherwise great guitar sound.  The pots and caps are all wired together in this menagerie that is not only complex, but not really needed!
Once again Dave D’Amelio is the MAN when it comes to Valco guitars. He is really the best tech out there when it comes to these wonderful American beauties, and if you have one that you’d like to turn into a player, it’d be worth your time to ship it on down to South Carolina!  The first thing he did was remove whole rocker switch assembly and replace it with a more traditional wiring scheme that allows the pickups to breathe and shine.  With the old wiring, it’s like the pups were trying to sing through a pillow.  It’s probably why these guitars have never become popular, although they are very collectable as not many were sold or still exist.  Dano Dave also knows the secrets on how to straighten out these necks without adjustable truss rods.  Let’s just say it involves wood clamps, a heat gun, and a prayer! He gave the guitar a re-fret and it’s really become a great playing, great sounding guitar!  This is a now gigable instrument!  Mike Dugan shows you how well it plays in this video!