Here’s a pic of my first UK made guitar, the Wilson Rapier 44!  These guitars were fetching some big money at one time, and the fellow I bought this one from got into a bidding war on ebay and ended up paying well over $1,000 for the guitar.  That darn ebay can really suck people in!  Anyway, when I bought this Rapier from him he had been holding onto it for a few years and never even played it.  When I got the guitar he also failed to mention that it had been drilled for another strap button on the other horn, and there was marker on the back of the headstock outlining all the tuning machines?!?!?!  You’d think those sorts of things would be disclosed, huh? 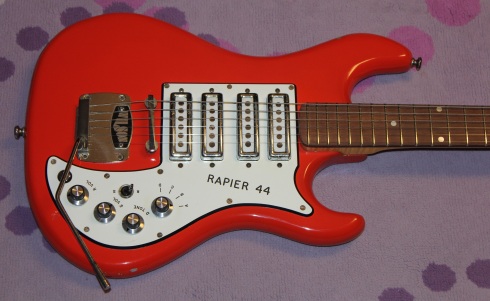 This Wilson guitar dates from the late 1960s and early 1970s.  The Wilson name was used on these guitars from 1968 onwards.  Before that, the WEM name was used from 1964-1968, and before that the Watkins name (and Hi-Lo) was used.  All of these WEM/Watkins guitars came from the UK production of Charlie Watkins, and his brothers Sid and Reg.  These are the same fellows who made the WEM amps, and the Watkins Copicat!  Needless to say these brothers and their company had a HUGE impact on the UK guitar scene.

The first Rapier guitars appeared in 1958 as the Rapier De Luxe but soon afterwards the model you see here became the standard.  Components such as pickups, tuners, and other construction did vary over the years, but the basic template remained until the late 1970s.  To my eyes, these pickups look almost identical to the Japanese Kawai pickups used in the late 1960s, but I can’t say that for sure.  They sound like the Kawai’s too!

The switching and electronics system is slightly complex, and I’d bet many a beginning guitarist was more than confused by the tonal options!  The switching runs down like this:

As you can tell, this is not a really high output guitar.  The wiring is in parallel and as you probably know from reading my articles, this type of wiring “reduces” the output when more than one pickup is switched on.  usually the best way around this is to preamp your tone using some sort of boost pedal.

Of course when I got this guitar I quickly realized the neck was totally messed up, the playability was horrible, and this poor old chap was just grungy!  I sent it on down to Dano Dave D’Amelio, just like I do with most of my guitars!  Once he dove inside the electronics he noticed that the pots were all 100k, which also doesn’t help the sound and output, but the pots were British and were wired really well (almost permanently) so he left them in there for history’s sake.  He also noticed that the tone control was wired backwards from the factory, so he fixed that.  As I mentioned before, all the electronics were REALLY dirty, so he gave them the Dano treatment and cleaned everything up.  The neck and neck angle were way off, so this Rapier got some shims and a re-fret.  Dano also adjusted the pickups, and cleaned off the aforementioned marker on the back of the headstock.

The tremolo and tuners work fine and seem to hold a tune rather well.  The closed back tuners also look Japanese to me, but again I could be wrong.  The tremolo is a really cool design that used a “knife-edge” system that supposed to allow the trem unit to return to its original position after use.  It reminded me of the Burns units from the same era, and it works pretty darn good!

One interesting aspect of this guitar is the type of wood used for the body of this Rapier.  I’ve read that a wood called Jelutong was used on most of the bodies, but Dano swears the body is made of particle board!!  If this is true, then this is only the second vintage guitar I’ve ever seen that uses particle board for it’s construction!  Do you know the other?  Hmmm?  The Kalamazoo guitars from the late 1960s!!!!  The paintwork has also turned problematic with these guitars since the polyester finish seems to prone to cracking and chipping.

One cool little tidbit I discovered was that these guitars were actually imported into the US for a while!  As if there weren’t enough guitars made/imported here!  Either way, there is a ton of information on the web about these Watkins guitars and I’d be remiss if I didn’t mention a spectacular website all about the Watkins Company.  The fellow that compiled all this work deserves a great deal of thanks and I wish there were more completed (and free) web sites like this one.  Excellent job mate!

And lastly, the article here wouldn’t be complete without Mike Dugan tearing it up!  Check out Mike playing my completed Rapier 44 using a Frantone Acoust-A-Boost, a Fulltone OCD, and a vintage Ampeg Gemini I.