Yep, this is one lil rockin’ guitar!  It’s another great example of the hidden gems out there in cheap guitar world.  Most of the time I see Cameo guitars come as hollow bodies, but this beastie is a good example of a later 60s solid body.  I believe this guitar was made by Sakai woodworking in Japan, and the slightly Mosrite shaped body combined with a solid one-piece neck makes for a cool guitar.

But where this guitar truly impresses is the pickups!  These pups are found in a few late 60s models, and I’ve seen similar pickups in 70s Harmony guitars.  But I’ve examined both, and I feel the pickups on this guitar are different from the Korean Harmony guitars.  Either way, these pups are just so cool!  Both pickups read out in the low 5k range, but they really have an articulate and powerful clean tone, combined with a growly and edgy dirty tone! Total rockers!

About that Cameo name, no one is sure who branded these, but there was a Cameo Company located in Oaklawn, Illinois during the 1960s.  This Cameo Co. was known as a maker of drums and drum accessories, so maybe this Cameo may be related to the drum company?  The Kustom Company bought out the Cameo drum co. in 1971, so it could be assumed that the Cameo name lasted until at least the early 70s.  Of course, as of now it’s all speculation.

The Cameo Deluxe has a great neck joint and used good electronic components, especially when compared to it’s time and peers.  During the late 1960s, big companies like Kawai were still chugging along even after the guitar boom of the 1960s was ending, but to see a guitar like this, that probably wasn’t made by Kawai, is really cool.  So many Kawai guitars used the same pickups, so a nice example like this Cameo with it’s super cool pups is just a neat find.  Current production guitars in this price range (under $300 all day) cannot even come close to the soul this guitar has! 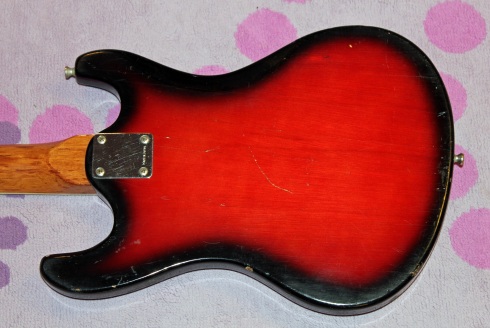 Of course this guitar suffered from the dreaded neck angle issue, so after spending many hours on this one, Dave D’Amelio was able to sort out all of it’s quirks and turn a closet queen into a superb player.  I seriously believe that almost every vintage guitar like this one has amazing potential when someone takes the time to work out the kinks.  It’s just a rewarding experience to resurrect a guitar like this, and when Mike Dugan plays this Cameo Deluxe, it’s just like a reaffirmation of the little good things in life!  Well, at least in my life!