OK, so here’s another example of an early Kurt Kobain guitar, and if you’ve read my other posts you’ve probably gathered that I really dug Nirvana and Kurt.  His early guitar choices were based on his constant poverty, but the guy did recognize good sounding guitars!  When I saw Nirvana in 89, he was playing a Univox Hi-Flier, so it wasn’t until years later that I realized he ever even played this model!  There’s an excellent site called Kurt’s Equipment, and it’s really cool reading.  Kurt used his Epiphone early on with Nirvana, during the “Bleach” era.

These guitars are totally under-rated and are one of my favorite Japanese imports.  In fact, many of my favorite Japanese guitars came from the Matsumoku guitar factory.  They just made some excellent instruments during the 60s, 70s, and 80s.  These guitars have a really cool “bass boost” switch that totally increases the output.  In catalogs it was labeled as a tone switch, but that darn switch really boosts the output!  I’ve seen a lot of rhythm/solo switches that don’t seem to do too much, but this effect is profound!  The pickups are really special, measuring out at a healthy 9.44k at the bridge, and 9.09k at the neck.  I friggin’ LOVE these pickups!!

Of course these guitars were made in Japan at the famous Matsumoku factory. One sorta sad part of the story is that Epiphone production shifted to Japan after the Norlin Corp. closed the Kalamazoo Michigan Gibson plant.  Leave it to the corporations!!!

This model was the first solid body offering for the Japanese Epiphones, and was introduced around 1970.  It was initially called model 1802T but then changed to the more commonly known ET 270.  This was the most affordable solid body Epiphone and cost $159 in 1974.  All the other Epiphone solid bodies came equipped with humbuckers, but I REALLY prefer these single coils!  The prices on the other guitars were: ET275 $174.50, ET278 $189, ET290 $220.  These were actually sorta high prices for Japanese imports.  In the early 70s a new Fender Mustang ran around $200, but of course those were still being made in the USA.

The backstory of this guitar reads like this- one of my first steady girlfriends bought this guitar for me!  She was pretty cool, but she spent money quicker than you can say “boo.”  She had this interesting habit of going shopping every Saturday morning and racking up her credit card bills.  Then every year for her birthday her mom would pay off her credit bill.  I’d never seen anything like it!  She bought stuff for me all the time and really spoiled me!  I went from two guitars to five in like one year!  I think she was the main reason for my guitar addiction, and this guitar was actually a christmas present for me.  I had seen this Epiphone hanging on a store wall for a long time and she knew I wanted it, and that christmas she bought it for me!  Nothing’s better than a guitar for a present!

And there’s that famous Matsumoku neck plate again.  In the 70s serial numbers began to appear but I haven’t tried to decipher the code.  Someone out there has probably already done it!  Apparently these guitars only came in red, and are often described as being a ET270 “T”, although in the literature I’ve seen I can’t find any reference to that “T” suffix.  Who knows? 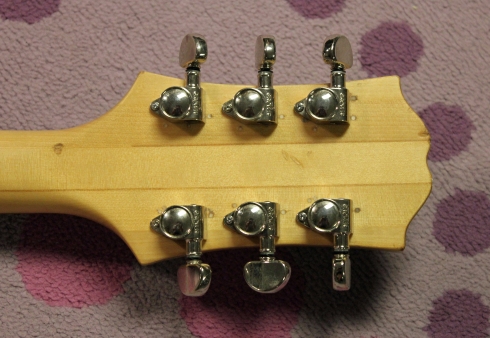 Anyway, the tuners had already been changed when I got this guitar but years later I had Dano Dave put on these mini-Grovers.  And Dave did just about all the other work on this one too!  Refret, check!  Neck alignment, check!  Rewire, check!  You know Dano also flips the magnets on many vintage Japanese guitars so that the in-between position is hum-cancelling!  Pretty crafty!  Mike Dugan did a great demo on this one, and he really shows the range that these instruments are capable of.  There are a lot of demos of these on the net, and you know 90% of them have dudes playing Nirvana songs!  We can do better than that…