Skip to content
Posted on August 25, 2012 by drowninginguitars Posted in Guitars

Back in the 1950s, big ‘ol hollowbodies like this were really popular!  Bridging the gap between acoustic guitars and solidbody electrics, these hollowbodies sounded really great for jazz, swing, rockabilly, and dark blues.  Beginning in 1959, Kay introduced this lower-priced model. 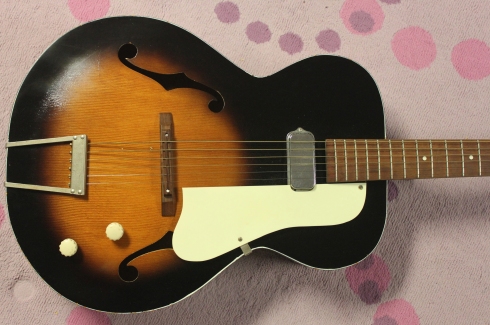 That single pickup was appearing on many Kay guitars beginning in the 1950s, and the simple controls and low price ($59.95) made this a good choice for a beginning guitarist.  The Gibson ES125, which also featured a full hollow body and one P90 pickup, was a similar model but priced closer to $100 in the late 1950s.  Of course, there were several differences in construction, and sound.

A cool feature of these old full hollows is that they can really pack a punch!  The acoustic properties can give a snappy sound, and volume like a cannon!  But the downside is that one neck pickup is somewhat limiting.  Many modern players like Jack White use these for slide playing.  The near-constant string contact limits feedback, and the neck position pickup can mellow out the sharp bite of a slide.

See that striping on the back and neck?  That’s not actually wood figuring!  It’s paint!  Kay painted those stripes on the body to give these a sophisticated, upscale look.  Like it was a much more expensive guitar.  But these were inexpensive in their time, and their inexpensive now.  A really good bargain in vintage guitar land! 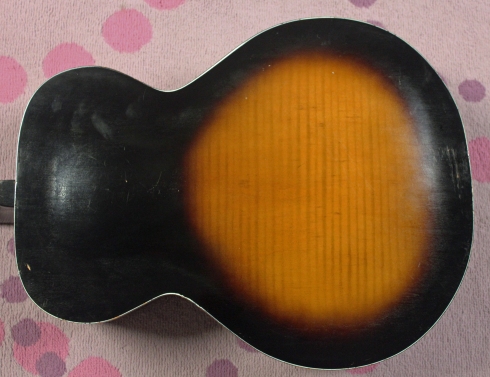 The wood portions of these guitars hold up well with the passage of time.  As long as they weren’t exposed to extremes in temperature and humidity, these old Kays were durable.  But Kay used very poor frets on most of their guitars, and I see many that need neck resets.

Many players would consider the neck profile a “baseball bat”, but I really don’t think it’s that bad.  Neck profiles just thinned out as the 1950s wore on, and by 1959, Kay necks felt really good!  There wasn’t a truss rod in these Value Leader necks, so there’s usually some extra set-up needed.  But again, playing slide is a good way around a bad neck angle. 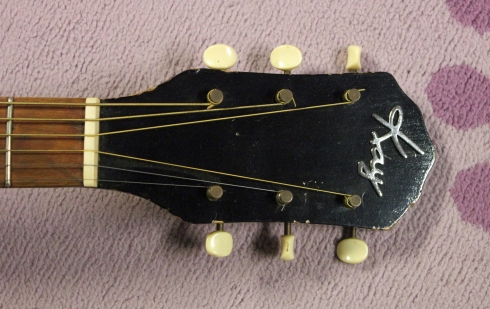 By 1960, Kay was offering more thinline models, which were also labeled at Value Leaders.  This K6533 model seemed to only last a few years and was gone by the early 1960s.  But when you want “that” sound, this is the only way to go.  As usual, Happy Guitar Repair did all the work on this guitar, and Mike Dugan does all the playing in the video.  Enjoy!