Ahh, yes.  My all-time, most favorite, cooler than cool Vox guitar!!  I love the name, I love the styling, I love the sound, and I love the build quality!  To find one of these intact, without crazy finish cracking and pickguard shrinkage is truly remarkable.  A little Mosrite, a little Stratocaster, and a little EKO all combined to make one awesome guitar that was only made from 1966-1968.  Let’s discuss!

First appearing in the 1966 Vox catalog, these were expensive guitars retailing for $399.  That’s a lot of bread when you consider that most of the Fender and Gibson solidbody guitars of the era could be had for less money.  Irregardless, the Italian EKO company was churning out these Bulldogs for mass consumption (along with some other cool Vox designs).

These guitars had some pretty cool features and were built really well.  Check out the two-way palm mute above!  The bridge and tremolo system work very well and the guitar does keep a tune.  Nice body binding, chrome galore, ebony fretboard, and a carved top make for one attractive guitar.

The Mosrite influence was clearly seen in these guitars, right down to the nut.  By 1966, the Ventures were HUGE, and Mosrite guitars were all the rage (if you could find one) and during this time period there were the beginnings of many Mosrite clones.  People talk all the time about “lawsuit” Japanese guitars, but way before any manufacturer started cloning Gibson and Fender designs, Semie Moseley’s guitars were the most copied by far!

The Vox name started in Englad after WWII, and was primarily known as an amplifier and organ maker.  Their first guitars were first produced in England circa 1962 (like the Phantom guitars!!) but within a few years Vox guitars were being made in Italy.  During this Bulldog era, there were several other models being offered by Vox including the Spitfire, Hurricane, Super Meteor, Harlem, and many other guitars.  Several models included crazy internal effects and for some reason many of the guitars were overly complicated with truly nutty controls.  This is why I always liked the Bulldog…it’s simple to operate and there’s not much that can break or go bonkers!  It’s a straight up rocker, or surfer! 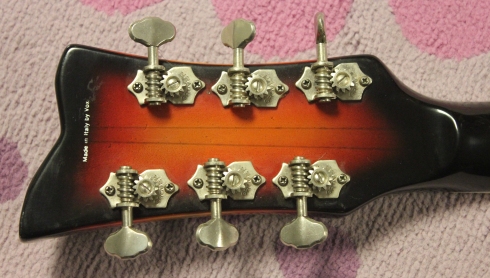 In 1969 the Bulldog still appeared in catalogs, but looked very different and kinda boring.  It was a two-pickup guitar and featured none of the coolness that had been found on the 66-68 Bulldog.  What a shame!  The first time I saw one of these was back in the early 90s at a used guitar shop in NYC.  It was so sweet looking but the finish had shrunk and expanded so much the checking lines looked like wrinkles!  That was the downfall of many Italian guitars back then.  The finishes didn’t survive well in the North American climate. 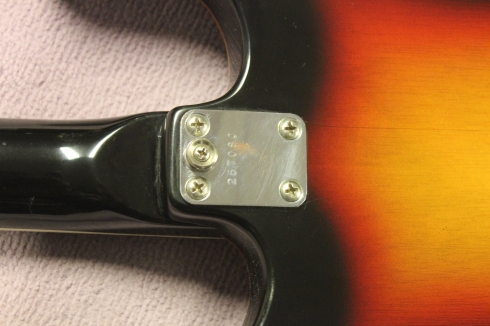 But when I found this model many years later, I was so shocked to see only one checking line!  Can you spot it in the pic above?  Overall, many of the 60s Vox guitars never became popular and they can still be had at affordable prices.  Only a few models, like this Bulldog, the Phantoms, and a few others have reached into the stratosphere.  I’m always talking about the quirkiness of vintage Japanese guitars, but many Vox guitars were quirky as hell!  That’s why I always gravitate towards simple, and these Bulldogs were simple in controls and cool in design.

As always, Dano at Happy Guitar Repair did all the work on this Bulldog, and Mike Dugan did all the playing in the demo.  Cheers!