Such an inconspicuous guitar.  Probably wouldn’t turn many heads, but of course yours truly just about flipped when I saw this one at the local pawn.  The guys who work the counter always laugh when I get happy at the site of a vintage guitar, and just like an episode of “Cheers”, everybody knows my name!

Let’s get down to this guitar….these Winston 449s were the last guitars to feature the Kawai pickups used on the early Hound Dog Taylor models.  It’s so odd to me, these pickups regularly read out in the 2k range.  Like on this guitar, they read 2.79k and 2.78k.  But if you only look out output, you’d be missing out on some of the best sounding pups to ever come out of the early 60s! 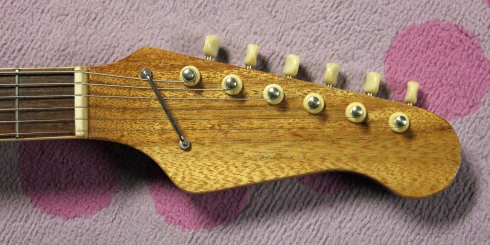 Once again Kawai produced this guitar, and Winston sold these to guitar shops in package deals.  In 1966 you could buy 10 of these suckers for $54 bucks a piece!  I suppose it was a great way to stock your store with “beginner” guitars, and this model even came in a few cool colors, including a gold finish!

These lack an adjustable truss rod, but do have a reinforced neck and the profile is extra chunky and feels great!  The rotary switch on these 449s is really cool too.  Kawai was only using these rotary switches for a few years in the mid 60s, and sometimes you got “lucky” and the in-between position was an out of phase choice.  Of course I say lucky because the way they wired these, it was all just a crap shoot.  It all depended on which way the magnet was orientated I guess?

Usually when I find a guitar this nice I think, “it must really be a bad player.”  But not the case with this old gal.  It plays wonderfully, and I really like the tremolo Kawai was using during this time.  Winston was a brand name of Kent Musical Products, which itself was a subsidiary of Buegeleisen and Jacobson, Inc.  Try saying that five times fast!

So there you have it, the last guitars to feature the awesome Hound Dog pups.  People are currently paying big money for those old Hound Dogs, but Kawai was building much better guitars at this time, and these Winston 449s are much cheaper alternatives with the same sound.  As always, Dano at Happy Guitar Repair dialed this one in, and Mike Dugan tears it up!