The days are long gone now, but there was a time when the Sears Department stores just ruled!  And if you didn’t have a store nearby, at least you could peruse the famous Sears catalogs.  Man, I just love the old Sears catalogs because they’re like a little time capsule of sorts, encompassing pop culture, technology, and fashion….and of course GUITARS!  I know many of you remember the days of the Sears catalog. 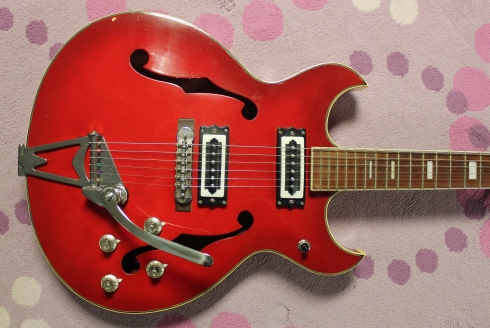 Now if you happened to look in the Sears catalog in the fall of 1969, you would’ve seen this nice guitar on page 929!  This somewhat fancy guitar was simply called the “Double Pickup”, but it’s more commonly known by the Sears order number, 1460L.  This guitar cost $88 and change back in 1969, and the model didn’t last more than a year.  Just one of the many short-lived models of the time, this guitar was a victim of the sagging guitar market and the many factories that were closing in Japan.  By 1969, the guitar boom was over, which is sort of a shame since the Japanese builders were getting really good! 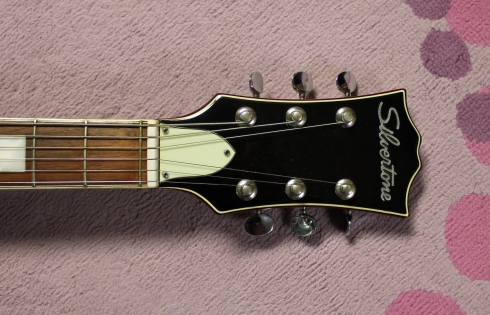 I really love the logo on this guitar!  It is a raised, metal logo.  And that stylized script is just cool.  It kinda looks like my cursive writing!  Of course the Silvertone brand is legendary, but by 1969 it was a fading name.  Only one guitar in the catalog was made in the USA (the 1485) and all the rest of the electrics were made in Japan.

When I first got this guitar, I was sorta shocked at its light weight.  I thought it would be beck heavy but the guitar’s large body allowed for a nice balance.  The electronics were ok, but the pickups were kinda weak sounding units.  These pickups appeared on a few different guitars and always sound just sorta “ho-hum.”  I guess is depends what kind of music you’re into.  The design of the pups was cool though!  The pickups read out in the mid 4k range. 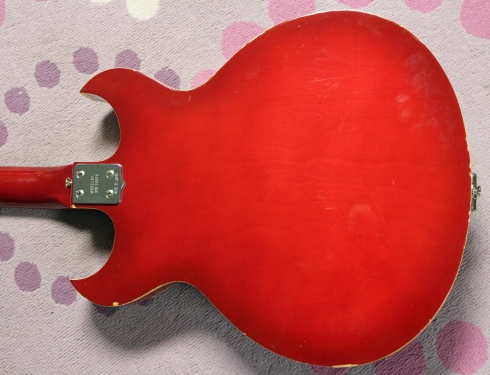 The neck joint was very interesting on this guitar, because it was like an old Gretsch…the end of the rosewood “floated” over the body.  I’d never seen a vintage Japanese guitar use that technique before, but like I said, the Japanese builders that had survived the crash of the guitar boom, were starting to really get good at the craft.  I look at this model as a sign of things to come.  Notice the volute below?

So all you youngsters from 1969, did any of you ever own or see this guitar?  Mike Dugan, who plays guitar on all our demos, remembers going to Sears when he was a kid, and seeing stuff like this hanging on the wall.  One of the cool experiences for him is to play these old guitars, even if he couldn’t afford them back in the day.