‘Wonderment’ is probably too light a word to describe the first Teisco ET-440 I ever saw.  I still remember it clearly, as it was way back in my early teen years.  Occasionally a few of us would venture out to local flea markets, antique shops, and swap meets to search out all kinds of treasures.  But there was this one particular old mall, full of second hand shops.  And in that mall there was a store called (as I remember) “Grendel’s Lair.”  It might have been called something different, I just can’t recall.  But what I do recall was this long hallway leading to the store, covered with old 45 records and magazines.  Entering the store, I was greeted with heavy cigarette smoke and almost constant rockin’ tunes playing from an old record player.  Man, I wish I could go back in time to that store! 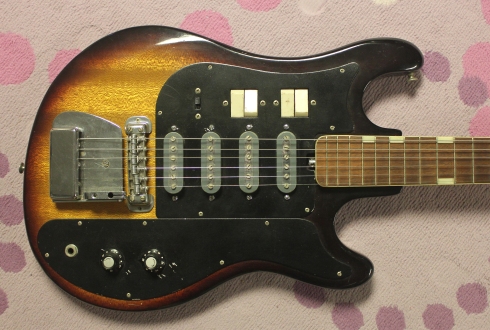 That store had such an assortment of items it was mind-boggling!  Records, magazines, antiques, guitars, amps, stereos, juke boxes, and toys, all dating to the 70s or earlier.  This eclectic mix of goods seemed to reflect the personality of the people who owned the store.  As I remember, they were much older than me but seemed to be leftovers from the 50s. I think there was a guy residing behind the large counter, but I remember the lady who always seemed to be there.  She was like this combination of poodle dresses, black-rimmed cat glasses, and saddle shoes, but there was always like this punk edge about her.  It’s hard to place, and maybe my mind was just hazier back then, but I remember most folks seemed to be slightly scared of this skinny old gal.  Anyway, it was in this store that I saw the first Teisco ET-440.  This was early on in my weird guitar days, so I didn’t realize that this model was sort of special in the lengthy catalog of Teisco guitars.

Teisco was probably the most popular Japanese guitar name back in the 60s.  The company had been importing guitars to the USA since the late 50s, but in early 1964, Teisco guitars started to really flood the American market.  Then in late 1965, Chicago Musical Instruments became the exclusive importer of Teisco instruments.  This is when the guitar buying public started to see the more familiar striped pick guards and shark-finned K guitars.  But going back to 1964, this ET-440 model appeared.

The grey “battleship” pickups were really unique and very short-lived, only appearing on Teisco guitars for a year or two.  And this ET-440 was the only one to feature four of the buggers!  These are good sounding pickups that were found on a few guitars from this period, including the ET-320 and the EB-200 bass guitar.  In Japan, the model names/numbers for these same guitars were different, but either way you slice it, they all featured these cool pickups.

Back when I saw that first ET-440 at Grendel’s Lair, I noticed the pickups.  Teisco was perhaps the first Japanese electric guitar maker to feature four pickups, and I just thought the model was the coolest darn thing!  But I also noticed some crack lines in the pickup housing.  And here is where the faults of these battleship pickups came to light.  Back in the 1964 catalog, this model was the most expensive model pricing in at $150.  But the devil was in the design of these pickups.  In the Japanese catalog, Teisco touted these models as “worry-free” since the pickups were housed in a molded resin.  But over time, the mold would often shrink and crack.  Because of the design, if the pickups failed, they were often impossible to repair.  Teisco probably realized this, because these pickups were gone and replaced with the square-polepiece models that were found on most Teisco guitars from late 65, on into the later 60s.

I never did buy that first ET-440 back then, but I did come across this one and was real happy with the sound.  Whenever you come across these pickups, be sure to check for functionality.  This particular ET-440 that I bought had some interesting painted pick guards that gave the guitar a cool look.  But in the end all these guitars had the silver, metal pick guards.  So hey, if you want to take a chance on one of these rare guitars, good luck!  If the pups are working, it’s all worth it!