Skip to content
Posted on April 18, 2014 by drowninginguitars Posted in Guitars

I was just old enough to catch the tail end, but many folks remember the days of the record store.  Large vinyl albums, huge artwork, leafing through the stacks….it was a cool time that lasted longer than the days of cassettes, 8-tracks, and CDs.  Nowadays, most music buying is relegated to the online variety.  But there was a time during the 1960s where record stores were THE place to get your music, and musical instruments!

That’s right, in window displays or hanging above the stacks of vinyl, guitars like these were waiting for teenagers.  Again, just a cool time!  This Decca guitar was sold through Decca Record stores.  In early 1966, Decca Records jumped into the electric guitar frenzy.  This was around the same time when CBS has bought Fender and only a few years away from MCA buying Danelectro. Curiously enough, Decca Records was a subsidiary of MCA.

Anyway, Decca and many other companies saw the potential profits of electric guitar sales and quickly tried to capitalize.  There was a whole line of guitars, amps, and accessories, all imported from Japan.  The entire instrument line was handled through Decca’s 21 branches and distributors throughout the USA, but the company seemed to concentrate on the east and west coasts.  There was also a Decca subsidiary in Canada as well.

This particular guitar was made by Kawai, and featured a design that was semi-exclusive to Decca.  Kawai was producing and exporting thousands of guitar to the USA at this time, and Kawai’s prices were very competitive, but Decca decided to go with an (as of this writing) smaller, unknown Japanese company to produce the guitars. 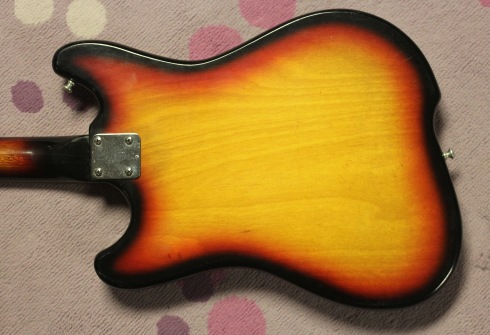 Many of the Decca electrics featured non-adjustable truss rods and just seemed to always be on the “cheap” end.  But some of the them did sound very good.  Sometimes you’ll see some really odd Decca electrics that literally copied the Teisco look from the same time period.  There were also some cool hollow bodies with set neck designs as well as the late 60s  line of guitars, like the DMI 231 pictured below.

On the whole, Decca sold a lot of these guitars but the timing was awful.  By 1968 the demand for electric guitars had decreased dramatically.  MCA was about to bankrupt Danelectro, and CBS was cutting all sorts of corners on Fender instruments.  Darker times were coming folks, but for a moment, let’s rejoice in the mid 60s era of records and guitars!