So check out this old guitar…beginning of the Japanese copy era stylings with that Gibson SG shape.  Although this model carries some of the Japanese flair with more extreme cutaways and body sculpting.  Most folks would just look at this one and think it was just another copy.  But look a little closer with me…. 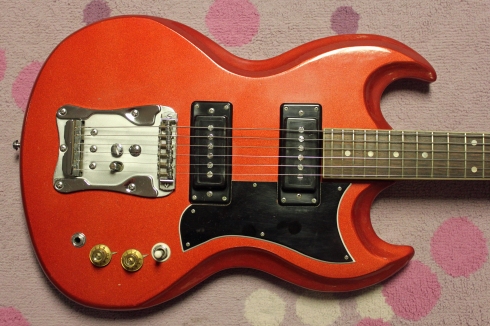 This guitar has Guyatone components, but it’s not a Guyatone guitar!  Like that tailpiece/tremolo.  That was a Guyatone exclusive, found on the famous Sharp 5 guitars and a few others.  And then those pickups, those are also Guyatone pickups.  In fact, those were specially designed Alnico units (which sound really nice) from around 1967. 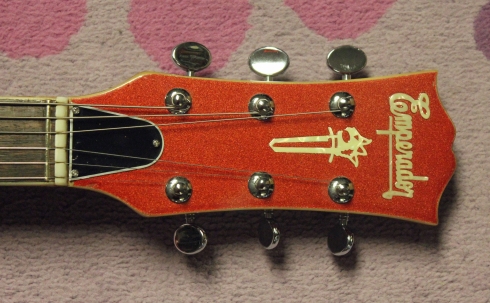 Even that darn truss rod cover is a Guyatone model!  The Emperador brand name was used by a Canadian importer so if you live up north you may have seen this name before.  The logo was applied over that cool sparkle finish and then lacquered over.  It’s like a raised plastic logo.  Sorta cool!

Venturing into the body I also noticed the Guyatone pots and electronics.  So what’s up with this guitar?  Well, I’ve seen this model before and they seemed to come in two finish options…blue and red.  I like these guitars quite a bit, but this was the first one I’ve seen with the Guyatone components.  Well, here’s how it shakes out.  Guyatone Co. went bankrupt in 1969.  The owner/founder of the company was Mitsuo Matsuki and believe me when I say this guy was a scrapper.  He had just built a new factory and unfortunately the guitar business was crashing all round the world.  Mitsuo sold off most of his stock and and this particular guitar maker purchased some of his old parts.

This sort of thing happened a lot in Japan during the 60s.  For instance, some factories only made the wood portions of guitars.  And other factories only made the electronics and/or accessories like tremolo units, tuners, etc.  During the 50s and 60s in Japan, many guitar factories simply partnered with others to make whole guitars.  During Guyatone’s run, there were some years when they made guitar bodies and necks, and other times where the work was farmed out.  But Guyatone consistently made electronics like pickups, and they were some of the best to come out of Japan.

Basically what we have here is like a “combo” guitar that shared Guyatone components during a time when Guyatone was struggling.  Mitsuo Matsuki came out in the 70s by rebuilding his company from the ground up, and Guyatone guitars did rather well in the 70s.  But this guitar was made during that strange window of time where Guyatone was at the lowest point in the company history.

We recorded two videos for this guitar, but the second one is blocked in certain countries. Either way, enjoy Mike Dugan playing in both videos!