Presented here is one of the cooler, early Japanese imports from that wonderful by-gone era.  Everything about this guitar reminds me of an ocean wave… details like the multi-pickguard, the body shape, even the rounded tremolo cover… it’s all contains this “sweeping” design aesthetic that Zenon guitars were famous for.

See what I’m saying?  Like one of those old Japanese ocean paintings!  Well, at least to my eyes.  Anyway, this particular model came in a few different colors that I’ve seen… sunburst, red, and a sea foam green color.  The three pickup configuration is sorta unique but those two pickups near the bridge can really drive an amp in a bright, aggressive sort of way.  I also like the switching on this guitar via that rotary switch. 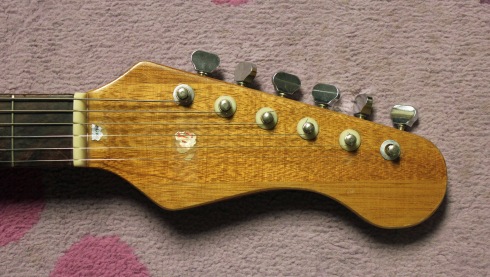 Here you can see just a small fragment of what is left of the original Victoria label.  I’ve only ever seen this model with the brand name Victoria.  Now speaking of that Victoria name, it’s a total mystery who used that brand name.  It probably was used by an American seller/importer/distributor and almost every Victoria I’ve been able to document has been a Zenon guitar.  The few other Victoria guitars I’ve seen were really interesting models by mostly unknown Japanese factories.  But damn, I’d love to know who held that Victoria name.  It only existed for a few years in the mid-60s, so if you have a Victoria guitar then you have a solid date of 1964-66.

These guitars used plywood bodies that were well-contoured and easy to sling around.  The finishes are very well-done and really these guitars can be good players.  They don’t have adjustable truss rods but the necks to stand up well to the passage of time.

The most interesting aspect of these “wave” Victorias is the neck plate.  See how the neck attaches at the body but then the neck plate extends up onto the neck?  How interesting/weird is that?  Only the earliest Zenon guitars used this neck plate attachment.  So strange how the early designers thought, but then again it’s not a horrible idea.  Probably overkill, but it does point to Zenon.  Zenon was and still is a music publishing company in Japan, kinda like Hal Leonard in the USA.  In the late 50s Zenon decided to capitalize on the growing guitar popularity by buying a local guitar factory.  In the early 60s they started to produce electric guitars and did switch production to another nearby factory.  So this guitar probably dates to the first electric guitar production because after 1965 you never see this neck plate again.

Either way, whenever I saw one of these old Victoria guitars I just bought it.  The necks have a great medium contour and feel great.  As is often the case, these old pickups were exclusive to this model, but did make a few rare appearances here and there.  Very rare units though, and they take high-gain effects very well!  That’s always a bonus.  Check out Mike Dugan playing this guitar below!