“Domino Imagination Leads the Rock Generation!”  Yes, that’s how the ad for the new Domino line read in 1967.  My goodness, Maurice Lipsky had some sort of crazy guitar lineup in those days, featuring a mixture of Fujigen, Matsumoku and (the craziest) Kawai guitars. 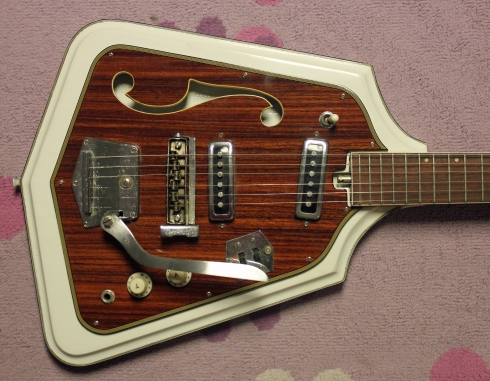 Soon after Kawai bought Teisco, the builders were soon designing some of the most extreme guitars to ever come out of the Kawai factory, or the 1960s!  I’ve seen so many cool examples of insane Kawai electric guitars.  I mean, it was like effortless for these guys in the late 60s.  This Domino Californian Rebel is just a perfect example.  The electronics and components were standard Kawai, but the body shape and headstock were just gonzo!

This model would’ve set you back $90 in 1967, and apparently only came in this white color.  Although there was a three pickup model as well.  I have to laugh a bit when I read the catalog description… the pickups (which were featured on a lot of Kawai guitar during this period) were described as “SOUND-POWERED” and were called the “famed MALLORY extended range.”  I wonder where the Mallory name came from?  But leave it to Lipsky and Co. to sell that product!

This guitar is only partially acoustic, with a hollowed out portion under the sound hole.  But otherwise this is a solid body guitar.  These were also described as short scale guitars, although they feature the same scale length as a Gibson Les Paul.  Go figure!  Other features included a “slender jazz neck”( measuring at 1 5/8″ at the first fret and 2” wide at the 21st fret), a “micrometrically adjustable roller bridge”, and a flip up mute at the bridge. 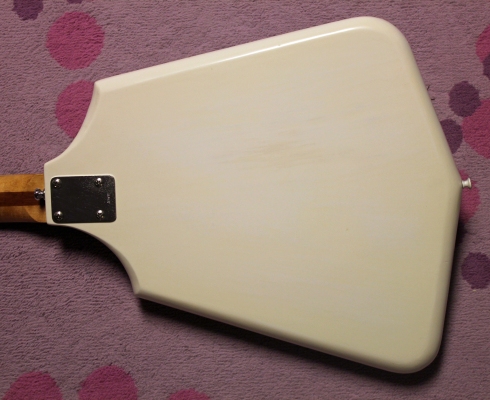 The slotted headstock was a unique feature for Kawai, and this is one of the few examples of the company using this build technique.  It’s also worth noting that during this time, many American importers were trying out design ideas of their own, and then commissioning Japanese makers to hash out these designs.  1967 marked the beginning of the end for the electric guitar boom of the 60s, so these more extreme designs could speak to the need for eye-catching guitars to keep those sales flowing.  But alas, the Californian Rebel disappeared by 1968… as did most of the Domino branded electric guitars.