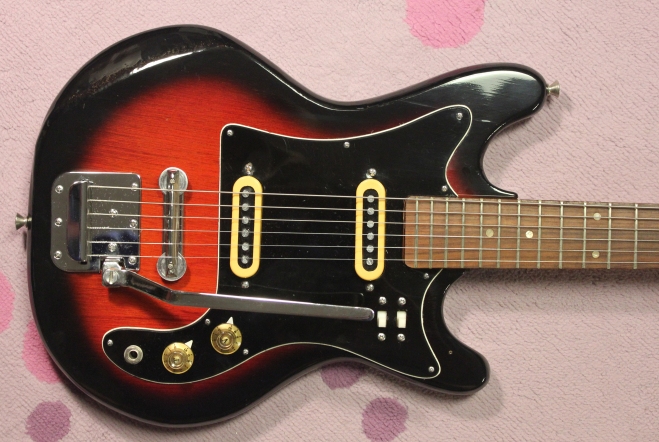 You know, I’ve been studying these darn Japanese electric guitars for a long time now. At first they all sort of seemed the same to my eyes, but after many years I’ve learned the subtleties, the minor things that make models and makers unique. What at first seemed trivial, soon became important in some way. And so it went with this old Crestwood guitar.

You see when I first got this guitar (and this was one of the early acquisitions for me) I was drawn to it because it was complete and it was clean.  It had a 60s look but a 70s feel, and that’s why I call this sort of guitar a transition model.  See, the guitar still had those 60s pickups which were copies of some popular Fujigen models, and it still had that 60s tremolo and the really poor bridge, but looking closely it had the sweetest neck and a wonderful balanced feel and tone.

Most folks would pass something like this over real quick.  I mean, it wasn’t wacky or crazy or bizarre.  It was just sort of nondescript in many ways.  But if you examine the period of electric guitar history, this guitar came out at a time when the electric guitar boom was in free fall.  This was also the beginning of the copy era, and the beginning of Korean guitar production.  In fact, this (almost) identical model was one of the first mass produced electric guitars to come out of Korea. But this one here was still being made in Japan. 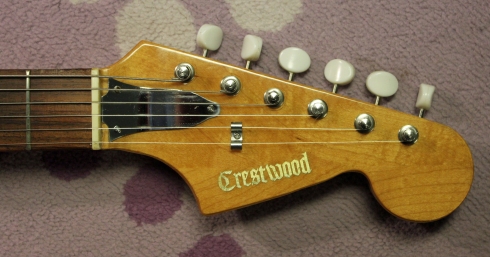 That Crestwood name was used by La Playa Distributing and there were many Crestwood guitars to be found during the 60s.   Heck, even today there are Crestwood labeled guitars! But back then this particular Crestwood had something that interested me.

Check out that neck, see that’s what interested me.  Rather than using the thin laminate style neck we see a nice maple neck on this one.  Fujigen and Kawai were still churning out guitars during this period but also using laminate necks, so we can rule out those two companies.  Almost all the Nagoya factories were done by the late 60s (or gearing up to make copy style guitars) so it probably didn’t come from that area.  The build quality was surprisingly good on this model, and the truss rod up by the neck, combined with the Fender-style headstock and the nice maple neck…well, this sort of neck would soon be sporting a Stratocaster style body in the 70s.  See, the Japanese makers were scrapping it out in the early 70s to compete with American makers.  Hoshino and Ibanez probably led the way when the owners of the company travelled to the USA (after setting up a Pennsylvania office) and basically talked to professional guitar players about what they liked and didn’t like.  It wasn’t long before Japan was making very fine electric guitars (many of them coming out of the aforementioned Fujigen factory).  But this guitar here was before all that… like a transition to a nicer guitar, if you allow me that point.

Whenever I travel to Japan to meet and talk with the good guitar folk there, I always ask about “mystery” guitars.  Like the guitars that I don’t have a clue to where they were made. And from what I gathered, and from what I know about Japanese guitar making, my best guess is this guitar is one of the earliest Suzuki Violin electrics made in Kiso Japan.  The Kiso factory produced some very nice hollow body guitars during the 60s and then made some very nice guitars in the 70s and 80s including the Thunder and ESP guitars.  But for a spell in the late 60s they made some electrics and this may be one of them.  There was also some folks in Japan who believe that Suzuki Violin in Kiso made the “Jaguar” branded guitars for sale in Japan only.  I’ve owned one of these Jaguars and there were some similarities.  But in the end, what we have here is a herald of things to come.  In the 70s, a lot of the wackiness would disappear from guitar design and there was a lot more uniformity.  For better or worse, at least the guitars were playing much better and Japanese quality became revered in many ways.  You could still find cheap guitars, but most weren’t being made in Japan anymore.

And one more interesting point… out of all our hundreds of video demos, this little nondescript guitar remains one of the most popular!