(Scroll all the way down for the video demo!!!) 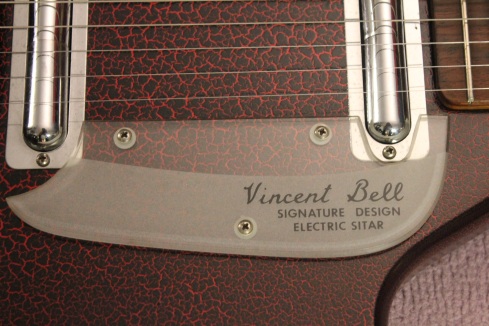 Yep, that’s what the ad in 1967 said, “Today’s ‘IN’ Sound”.  I wasn’t born until the 70s but I have to say if this was the “in” sound, then those were some groovin’ times, dig?  Sorry, I couldn’t help myself!  So buried in the Dano collection I find this electric Sitar.  I always knew Dano had this but I never really LOOKED at it.  I mean, it’s so interesting!  Like the Textured “Bombay Red” finish!  The odd shape!  Those extra strings!  Whaddya do with those?!?!  I cranked up the cameras and keyboard, and figured it was high time to shed some light on these scarce guitars, or should I say, Sitars! 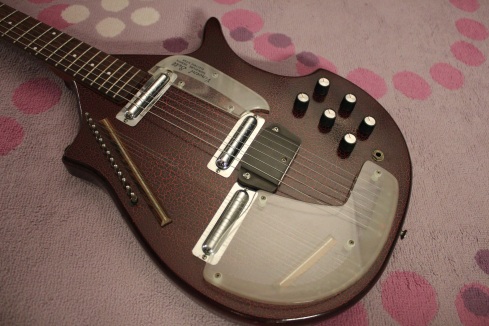 The electric Coral Sitar was the first of it’s kind and came out of the Danelectro affiliation with Vincent Bell.  Remember that this was when MCA bought Danelectro and the company was to be closed in a few short years.  But in 1967, times were still good and the electric Sitar was like the dawn of something big!  The odd looking “SITARMATIC” bridge creates that sitar-like sound and those other strings (they’re called drone or sympathetic) were supposed to capture some of the vibration and resonate in their own, droning way.  Those drone strings even had their own pickup!  All patents belonged to Danelectro/MCA and there was even a Sitar built left-handed for Jimi Hendrix!

The body construction was mostly typical Danelectro since they used masonite boards on a pine frame.  Tuners were good Klusons, and there was a volume and tone for each of the three lipstick pickups.  The list price seemed pretty steep for the times at just under $300, but when I saw the current market value for these, well, let’s just say these go for serious money!  I was asking Dano about how he bought this Sitar and it turns out to be a pretty good story, so I’ll let him finish the rest:

I found the Coral in Los Angeles when I was living there. This was in like 1990 or 1991.  It cost $1000 and I found it in a music store called Waldos. I think the store was in Hollywood, maybe on Sunset. The guy who owned the store was the coolest dude, just a super nice guy.  I would go there and hang out all day and ask him all kinds of stupid questions, mainly because he was such nice guy, which can be hard to find in LA. 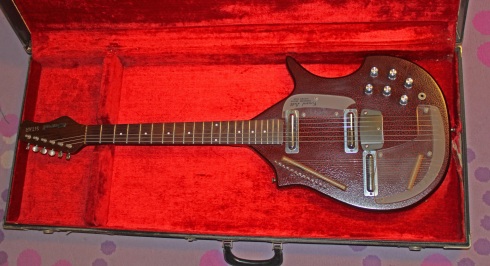 His shop was great because he had a lot of misfit guitars, a lot of Danelectros, other crazy stuff. He didn’t have a lot of Fenders and Gibsons. I actually had to put the Sitar on lay-away and I made payments on it every month.  I would go into Waldo’s all the time and try to learn songs on it.  The first song I learned on the Sitar was “Hooked on a Feeling” by B.J. Thomas.

I remember I was down to the last payment on the Sitar and I was really broke and it came down to paying my month’s rent in west Hollywood, or paying off the Sitar.  So I got kicked out of my apartment and moved into my girlfriend’s house with my Sitar!  It was so awesome to make that last payment!

This Sitar was made in 1967, and both Sitar models were pretty much commercially unsuccessful.  I had heard that Sitar sound on records and always wanted one.  I had heard it on songs like “Signed, Sealed, Delivered” by Stevie Wonder.   Also that song “Cry Like a Baby.”  I remember every time I went in to Waldos to make a payment I was totally amazed by that sound.

The Sitar works because of that bridge, since the strings don’t have a clear take-off point, it creates like a buzz or a rattle.  The sympathetic strings don’t do too much because they’re really not long enough to be totally effective.

The set up was pretty good although it did need a refret because the frets were low. A lot of the Coral guitars still used jumbo frets but for some reason a lot of the Coral frets seemed to have a lower profile.  Overall the guitar balances pretty well and it’s comfortable to play.

Shortly after I got the Coral Sitar I moved back to Pennsylvania and started playing it in the band I was in.  A lot of the local musicians just freaked out when I pulled it out of the case!

And so after hearing Dano tell his Sitar story I HAD to have Mike Dugan come over and play this darn thing for your viewing pleasure!  Mike had never even played a Sitar before so we quickly searched YouTube for songs.  Mike asked for “Monterey” by The Animals and “Cry Like a Baby” by the Box Tops.  He already knew “Norwegian Wood” by the Beatles, so after like (seriously) three minutes he learned all the chords and riffs and I pressed RECORD.  Enjoy.