You think you’ve seen strange?  Man, this guitar right here is probably the most bizarre of the bizarre!  I mean, come on!  How wacky can you get!?!?!  Totally original design here!  This one had me stumped for a while but I finally figured it all out, and what a relief too! 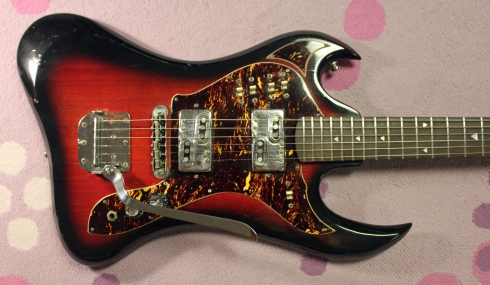 Check out those crazy horns!  Very reminiscent of the Tokai Hummingbird guitars.  But then check out that crazy upper bout, and the triangular inlays, and the nutso split pickups, and the Burns-like pick guard!!  I got this guitar in New Jersey and when I laid my eyes on this one, I was just in awe.  I just would not be a good poker player.

The guitar has plenty of wear and finish checking.  And good grief, the neck was so messed up.  In fact, almost everything about this guitar was messed up!  It ALL needed serious work by a serious tech, and thank god for Dave D’Amelio!!!  He spent DAYS on this guitar, and we were both pleased with the results.  This sicko is now an everyday player, which is the goal of all my guitars.  I just don’t believe in wall hangers, although when you start to accumulate so many guitars then some tend to stay on the wall longer than others.  But this psycho is getting some regular play right now! 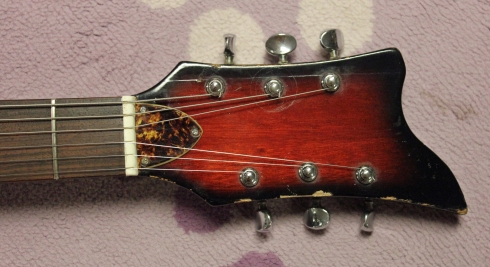 The headstock is very similar to my Imperial 4 pickup guitar, and I’ve talked to two other “experts” that own these and have seen these guitars with an Imperial badge.  But it wasn’t until I spoke with a really nice Japanese fellow named Ryo (or Ryo san in Japanese, hey, I’m learning!!) that I learned even more about these guitars.  There was a music store in Tokyo owned by a company called Hara Gakki.  They carried a full line of guitars that carried the brand name….get this….BURNS!!!  That’s right, not Burns of London, but there was a Burns of Tokyo!  Hara Gakki started selling the Japanese Burns guitars in the spring of 1967, and supposedly stopped around 1969.  Of course, these Burns guitars were never meant for sale outside of Japan, but apparently some of this exact style were imported by the Imperial Accordian Company.  Either way, this is one of the more rare Japanese guitars to ever cross the ocean.

Other Burns (Tokyo) guitars included some Fender copies, and some semi-original designs very similar to some Noble and Norma guitars from the later 1960s.  So once again, I can sleep well at night knowing I figured something out!  And our post wouldn’t be complete without leaving you with a video of Mike Dugan playing one of the wackiest guitars either of us had ever seen!  He was almost scared of this one!