Pawnshops used to be some cool places to shop for the starving musician.  I mean, when you’re totally poor, or living on a friend’s couch, or paying for gas with change, then your guitar choices tend to be rather limited.  This was the position many of us were in during our youth (I hope you’re still not living on your friend’s couch) and the local rough pawn shop was like a revolving door of cheap gear.

In my neck of the woods, there were six pawnshops that sold gear.  It seemed like every weekend I’d drive around and scour the new stock.  Sometimes there’d be guitars hanging in there for months before I would notice them and other times I’d grab a guitar immediately off the walls.  Some of the shops were a little smelly, others a little scuzzy (do you use that word?), and others had some genuine charm.  But they all had one thing in common, cheap gear!  Oh man, I just get all giddy thinking about the treasures I picked up at my local pawn shops! 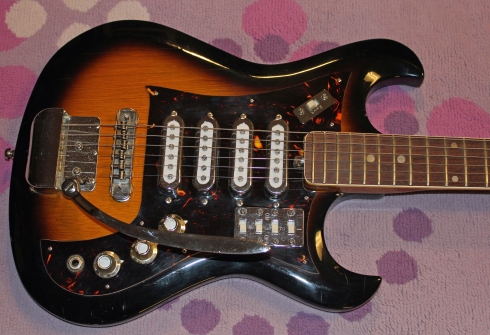 Well, times and places and fortune sometimes change as most of you know, but there are some places where the rough pawnshops still exist.  And this guitar right here was found in one of those throwback pawnshops about a year ago.  This guitar is a weird one, and a rare one, no doubt.  This Demian had been hanging in that pawnshop for many years, and it seemed like the owner had grown a little attached to it as he wasn’t really into accepting offers, which was strange.  I learned many years ago some items hanging in pawnshops had been there so long they had become part of the decor, as if they were a sign or trophy signifying the status of the goods therein.  Something like that anyway.

So getting back to this guitar, it has lots of cool features.  Four pickups, cool.  Tremolo arm still there, awesome!  Neck binding, stylish.  One-peice neck, oh yeah!  Chromed plastic knobs, huh?  Carved horns, wha?  See where I’m going?  The knobs here are like run-of-the-mill plastic knobs, but they’re chromed out!  That’s sorta weird!  Then the carved horns…see, most body carves on vintage Japanese guitars didn’t have interesting bevelled carving like this.  Maybe there was some subtle carving around the body (like on this guitar), but to have this “sharpened” carve around the horns is just really cool.  One of the only other examples of this is on my Shaggs guitar.  Distant cousins perhaps?

Lately I’ve been really able to discover a lot about Japanese guitar manufacturing.  I’ve been talking with several nice Japanese dudes, including many former guitar craftsmen.  I’ve learned a lot about various factories, and I’ve learned a lot about identifying various guitars.  Right away I thought this one was a Fujigen made guitar, especially since the Demian name was used.  But as I looked closer I realized it wasn’t consistent with Fujigen manufacturing techniques.  So then I figured Kawai, but once again a lot doesn’t match up with what I know about Kawai techniques.  So at the moment, I’m stumped as to who made this guitar!

The pickups are really hot, and they read out at 7.25k at the bridge and 7.15k for the next pickup.  But then two pickups towards the neck read out much lower (probably a capacitor affecting the reading) at 2.77k and 2.72k.  Weird huh?  It’s something I’ve never seen before, and when you play this guitar, there’s no noticeable change in output when you switch through the pickups.  It definitely uses some weird wiring schemes, but that’s just one other weird factor with this guitar.

The tuners are also of a higher quality than the average tuners of the time and place.  I have seen these covers before, but the gears inside just seem tighter and of a better quality.  Maybe they have a different ratio than what I’m used to?  I can’t quite put my finger on it, but there’s just something about this guitar!  The pick guard is also interesting because of the material used.  It has a pattern and quality that seems a step above as well.  It’s a 3-ply guard and it’s precision cut.

Of course the guitar sets up very well and Dano was able to get the action way down to 2/32″ at the 12th fret.  In fact, when you’re buying a vintage Japanese guitar like this, a good question to ask the seller is how low is the action at the 12th fret.  If the action is above 5/32″, and the bridge is lowered all the way down, then you’ll need to make some serious adjustments!  Just like mechanics knowing how to work on carburetors, guitar techs knowing how to work on these quirky guitars are a dying breed.  So as with all my posts, we’ll end with Mike Dugan giving the guitar a test drive.  Hope you dig it!