Skip to content
Posted on September 30, 2012 by drowninginguitars Posted in Guitars

Talk about a simple design, these Teiscos always reminded me of the Japanese Teisco equivalent of a Telecaster, only with more quirks!  These ET200s were probably the most common and popular Teisco design, easily winning the prize for the often cheapest guitar in the Teisco lineup! 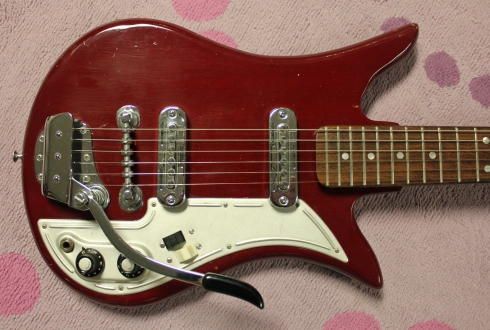 Usually these are seen with the late 60s floral pick guard, but this one has this seemingly rare stamped metal guard.  I don’t think I’ve ever seen this on a Teisco before, and that tremolo arm is sorta unique, right?  Notice how the knobs are raised on the pick guard?

Red always seemed like a popular Teisco color, and during this time period (circa 66) all these guitars were built using solid wood (not plywood).  These actually have some sustain!  Pickups are ULTRA HOT and read out at 6.53k and 6.33k and of course this one has series wiring so with both pickups on you get that jump in output.  I love that!

So how about that painted neck?  Is that common or rather rare for these tulips?  Even though I love vintage Japanese guitars, I was never a huge Teisco buff so I can’t say for sure.  I do know that in my youth these could be had all day, every day, for $50 at pawn shops!  These were as common as pointy “superstrats” in the 80s, but the only difference is no one wanted these.  Oh how times have changed! 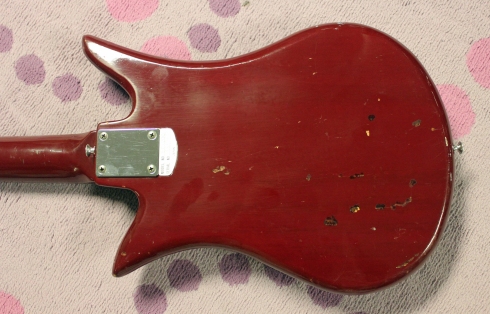 These guitars really make excellent garage band hammers, and I mean that!  Like, the frets are super tiny so you can’t shred on these guitars, but the pickups sound so raw and powerful!  It’s like barre chord city!  At least that’s what these were for me!  I had plenty of these back in the day, and this is the only one I kept.  I’ve probably had this for 15 years, and it always sounded better than the others I’ve had.  You can probably guess that quality control wasn’t a huge deal back then, and just like old fuzz pedals, you had to try these out.  Some were dogs and some were winners, just the way it is.

I have one buddy who swears these will become collectable one day, but since I grew up on these Tulips I just can’t look at these as anything but old school rockers.  Cheap, plentiful, roaring, ripping, smash apart at the end of the show thrashers!  I just can’t get that out of my head!