This guitar got a big ‘ol butt!  Ha!!  Check out that lower end, that’s just some serious oversized acoustics happening in that area!  One of the more interesting hollow designs from the late 60s Teisco, the EP 11 T was just a big ‘ol biggie, and shared some of the same dimensions and construction as the more famous Teisco Firebird.  There was also a 12 string variation of this guitar!

Okay, so you have this big body and the pickups are squeezed into that tiny area near the neck, so as you can imagine this guitar can feel a little strange to play.  And one aspect you’d miss unless you held one of these in your hands is that the body is a full 2.5″ deep!  In comparison, most of the Teisco hollows from this era had a body depth of 1.5″ or thinner.

You’d think that big bottom would contribute to a bassy sound, but this guitar sounds snappy, and loud.  It has really good acoustic tones, and that just enhances the electrified sound.  And check out that beautiful figuring in the wood.  Hints of birdseye are all over the place!  This Teisco was made by Kawai, as were all Teisco guitars starting in 1968.

These EP11T guitars were only made for a year or two, and did appear in a Sears catalog, because this one (even thought the sticker is gone) was labeled as a Silvertone.  These guitars were billed as “professional” models in their day, and were the most expensive Teisco hollowbody guitars in the 1969 Bennet Brother’s catalog, except for the 12 string model. 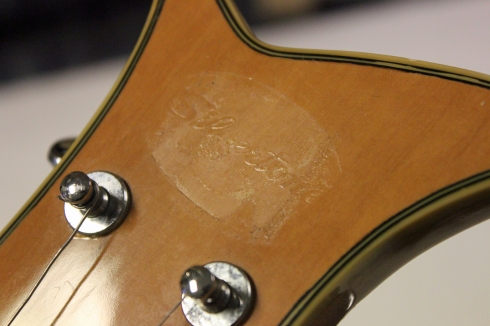 The last cool feature of this model is the headstock.  One of the cooler headstocks to ever appear on a Teisco guitar, it has a wonderful carve and the craftsmen took their time to make these.  And thankfully, it’s not broken!  These headstocks usually always have that longer “horn” snapped off.

There are a few guitars with this wavy headstock, and sometimes people refer to them as “cousins”.  I guess they are kinda related in a sense.  You know, Kawai was using laminate necks on almost all their guitars during this period, but here we see solid construction.  This really was striving to be a professional model!  These tuners work well too.

There was one area where Kawai was skimping though, and that was in the pickups.  From the top, those square pole-peice pickups looked the same, but underneath they were sort of wimpy and had much less windings than before.  Sneaky!

Also notice the strange neck plate location here.  Under that plastic plate is a cavity of sorts, where the neck plate resides.  The neck attaches straight into the neck block, and there were several models by several companies that used this method.  Sort of weird.

Anyway, Dano down at Happy Guitar Repair just about blew a gasket on this guitar.  When I bought it, I knew it needed some work.  But man, it needed a lot!  The neck had more humps and bumps than an old country road!  Electronics were totally whacked!  But check out the video below and you can see Dano’s hard work in action, through the playing skills of Mike Dugan.  I love happy endings….

Follow @DrowningGuitars
© Frank Meyers and Drowning in Guitars, 2012-2017. Unauthorized use and/or duplication of this material without express and written permission from this site’s author and/or owner is strictly prohibited. Excerpts and links may be used, provided that full and clear credit is given to Frank Meyers and Drowning in Guitars with appropriate and specific direction to the original content.
%d bloggers like this: