In the spring of 2013 I went on a whirlwind tour of Japan, with the sole purpose of learning more about the history of Japanese electric guitars.  In the USA, we are literally drowning in vintage Japanese guitars, yet not many people understand the origins of these guitars or who made them.  I decided to find out for myself since I just couldn’t take the myths, misconceptions, and rumors surrounding these instruments.  I researched the importers, companies, and factories.  Many of the old guitar companies are long gone, since only a handful survived the guitar “crash” of the late 1960s.  But there is still one company that’s still going strong after all these years, and that’s Fujigen.  I visited two of the Fujigen factories in 2013, and I wanted to share a little about this resilient company in Matsumoto, Japan.

Fujigen Gakki (as the company was originally known) was started way back in 1960 as a violin maker.  Production soon switched to acoustic guitars and then electric guitars.  By 1963, America was beginning to see the first Fujigen-made solidbody and hollowbody electric guitars.

At this time, the “guitar boom” was in full swing.  The Ventures had visited Japan, the Beatles were taking over the world, and seemingly every teenager wanted an electric guitar.  But by the late 1960s, demand was waning and many of the Japanese companies that were supplying the demand went out of business.  Only a handful of companies survived.  By 1970, Fujigen was making electric guitars with the Greco brand for the Japanese market, and was making Ibanez guitars for the large company Hoshino Gakki.  Fujigen was cranking out some seriously nice guitars during the 70s, including a partnership with Roland to create the first “Guitar Synthesizer”. The quality of Fujigen instruments caught the eye of the Fender company, which was owned by CBS at the time. After visiting several Japanese guitar factories, Fender decided to partner with Fujigen, and Fender Japan was started in March of 1982.  Most Fender fanatics know that many of the finest reissue guitars were produced by Fujigen during this period.  Players are always talking about the “JV” reissues and the high quality of the “Made in Japan” era electrics. That was all Fujigen!

So when I decided to start heavy research of the history of Japanese electric guitars, I just had to visit the Fujigen company learn about this company.  Fujigen has this long history, and is currently known as one of the finest Japanese guitar factories.  Fujigen makes guitars for other companies as an OEM manufacturer, and makes their own brand of “FGN” guitars.  I saw many electrics being produced at this factory, and let me tell you, all the high-end Japanese guitars are produced here!  It was impressive!

The Fujigen factories are a real model of efficiency.  Walking through the factory, I was greeted and welcomed by every employee that wasn’t busy making guitars.  The whole philosophy of the company stems from its founder, Yuichiro Yokouchi.  Now in his early 90s, he was about the most pleasant man I’ve ever met!  He always wanted his factory to be well-organized, clean, and nice.  He often compared himself to a maestro, orchestrating all the components of a well-oiled company.  I visited four different factories during my two-week stay in Japan, and Fujigen just blew me away.

One thing I really appreciated about the Fujigen company is that they valued the experience of the older craftsmen and women!  There were many employees with over 30 years of experience, and these employees don’t just act as consultants.  These people are directly involved with the making of guitars.  I have photos from the 1960s, taken at the old Fujigen factory, with the same employees I met in 2013.  These people still work here!  It was amazing!

For instance, Mr. Yoshida has been with the company for many years as the supervisor of wood purchasing.  This man personally selects wood from all over the world.  I listened to him explain the tonal properties of wood that had been sitting at the bottom of a lake for over a hundred years, and how the grain affects tone.  Unreal.  Other long time employees include Mr. Hagiwara, Mr. Idei, Mr. Shimoda, Mr. Hojo, Mr. Furuhata, and of course Mr. Yamazaki.  Mr. Yamazaki has worked for Fujigen since the start of the company, and he’s sort of a celebrity in Japan.  Known as the “god” of painting, this man is world-renowned as a finish expert.  I watched him work and it was totally impressive.

During the 1960s, many early Japanese guitars suffered from wood-drying problems.  Proper wood-drying is a time-consuming process, and since many of the guitar factories were brand new at the time, there weren’t that many wood-drying facilities in Japan.  Even today, there are many guitar companies that are churning out guitars with little attention to proper wood drying and curing.  But at Fujigen, I saw a wood drying facility like no other!  It’s their proprietary method, and the whole contraption was built and engineered at Fujigen.  Inside I was surprised to hear classical music playing…for the wood!  That’s right, Mozart music is played through speakers on the inside wall, to impart some musical mojo I suppose.  But that’s the sort of attention to detail that I found at the Fujigen factory.

There’s also a blend of the old and new at this factory.  There are some high-end machines like CNC equipment.  And adjacent to these machines are old-school carving molds!

All of this work goes into some of the finest guitars on the planet.  The electric guitars produced here get a lot of personal attention, and time after time I met employees that specialized in certain areas of the process.  There was one woman who filled the fret ends on guitar necks.  This woman was incredible!  I never even thought about how fret ends are filled on maple necks!  Speaking of frets, Fujigen has developed a cool Circle Fretting system.  Very innovative.

In fact, while I was at Fujigen I learned about many techniques that they used to make the electric guitars.  Check out this lesson on “nesting“, and how they use a low set-up process for the bolt-on electrics.

Many players know about the Ibanez necks and the compound radius they use.  Fujigen engineers are largely responsible for perfecting this comfy radius.  I saw necks that were rough cut using machines, but all final shaping and fitting is done by hand.  I always had this idea that most guitars are all made by machines these days, but to see this level of hand-work was refreshing and reaffirming.

People, Fujigen is making some fine guitars right now.  You can check out the company page here and you can see their current catalog.  Nice stuff.  Fujigen also has a Facebook page and a Twitter account and so you can keep up with the company news.

So there you go!  I went to Japan to learn about history, and I got schooled on current methods and high-end technology!  Hope you enjoyed this little trip, and if you’re wondering about the 1960s era of Fujigen, the book I’m writing will be out in 2014!  Cheers! 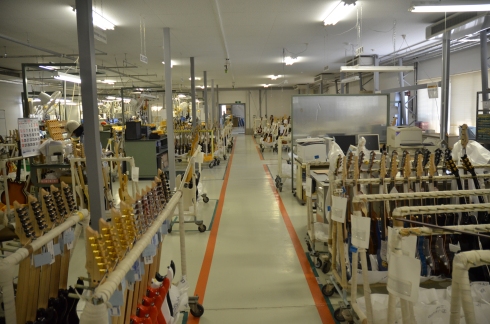