Just look at this design!  Man, if there was ever a guitar destined for the name “Swinger,” it’s this one!  This exact guitar design was branded with a few names, like this Sorrento guitar.  If you bought a Kingston branded model, it said Swinger up there on the headstock.  This design was a Kingston “exclusive” design, sold through Westheimer Co. in Chicago. 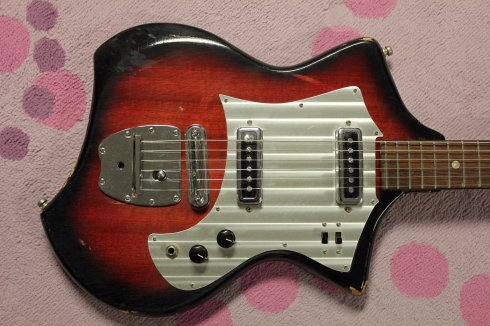 The real model name for this guitar was simply the A-2T, and a there was also a one-pickup version called the A-1.  Would you believe this guitar wholesaled at $25!!!  As the catalog mentions, it was “Priced for the teen-aged trade.”  Oh boy!

Whenever I see a picture of this guitar, or hear that name, I just can’t help but think about the “swinging” culture of the 60s and 70s, and the whole partner-swapping thang!  I mean, I can just picture Hugh Hefner playing one of these guitars in his smoking jacket.  Right?!?! You know, I wasn’t around in the 60s, but it must have been one hell of a time!  The sexual revolution was happening, and guitars were being branded as Swingers!!  Imagine if you the kid who played this in the local garage band.  That dude probably got all the chicks.

I also think of this girl I knew in college.  She was married with kids and was going back to school to get her degree, so she was a bit older than the rest of us greenhorns.  But I got paired with her on a research paper, and out topic was the Internet (which was like a new thing in 1992).  Anyway, she comes out and tells me that her and her husband were swingers!  I was just fascinated and was asking all these questions, like we were sharing recipes or something! Crazy!  People are always telling me their life story, like on the first meeting.  Anyway, she schooled me about the current swinging culture, which experienced a sort of rebirth in the 90s because of….. can you guess?  THE INTERNET!!!  We wrote that darn paper and turned it into a thesis on how various sub-cultures were able to come together for the first time on a grand scale.  I also remember her daughter was about 6 at the time, and just the sweetest little kid you ever wanted to meet.  She would come to class sometimes and she loved to write little poems.  She even wrote one for me, complete with a portrait, and I still have it somewhere around here.

Oh wait, were we talking about gutiars?  Oh yeah.  See what happens with that darn Jack Westheimer and his model names?!?!  Bless that old Jack.  Anyway, this was a Kawai-made guitar and kind of standard fare for the time.  This guitar was built on the cheaper side, because of the non-adjustable truss rod.  And see how the striped pickguard borrows from the Teisco design?  To be fair, Teisco borrowed that design from another company in Japan, but that’s a story for another time.  One benefit of the non-adjustable truss rod was that the necks were made bigger to support the strings.  So if you like bigger neck profiles, you’ll probably dig these guitars.

Well peeps, there you have it!  Now go out and research the origins of swinging culture!  And the paper will be due at the end of the semester! But first check out Mike Dugan playing a song I would have never picked to play for this demo.  But hey, he’s the man!  He can play what he wants.