Well, well, well…what do we have here?  Check this out folks, at first glance you can see the familiar body and neck of a late 60s Valco-made solid body electric guitar.  Even the pick guard is familiar.  But then, check out those electronics!  Definitely Japanese-made.  So what’s going on here?  Let’s examine…

Towards the end of the 1960s, several US guitar makers were starting to use Japanese guitar parts.  One of the first companies was Valco, when they started using Matsumoku designed guitar parts on American-made guitars.  But this guitar is way different.  Check out that old, simple tremolo on this guitar.  Even the Japanese makers were abandoning these tremolo systems by the late 60s.  But there it is, stock on this guitar.  And then those pickups.  I’ve seen a few similar pickups, but these are unique in several ways. If you’ve ever studied the late 60s Valco guitars, like the Lexington, you’ll see those awful pre-set tone switches.  Yet, check out this guitar…it has them too!

During this time in Valco history, the late 60s, the company was beginning its decline.  Valco and Kay had “merged” and both companies were limping along as the guitar boom of the 60s was coming to a close.  Valco had abandoned most of their fiberglass guitars and introduced these solid body models around 1965/66.

Really, I love the late 60s Valco guitars, mainly because of the awesome pickups.  But I’ve always quietly wondered if the bodies and necks were made in the USA or Japan.  I’ve never researched the topic, but I wouldn’t be surprised to find out these guitars were “born” in Japan.

So what’s up with this guitar?  Why do we have this strange marriage of parts?  You know what’s really crazy, I’ve seen another one just like this!  And I’ve seen hollow bodies with the same thing going on….Japanese electronics on a supposedly US Valco made guitar!  Was it just Valco finishing off their stock, selling whatever they could?  Did these guitars originate in Japan, and then imported to the states?  It’s just one of those puzzling aspects of 1960s guitar mystery.  The sharing of parts did happen quite often, like Kapa guitars and Premier guitars for instance. 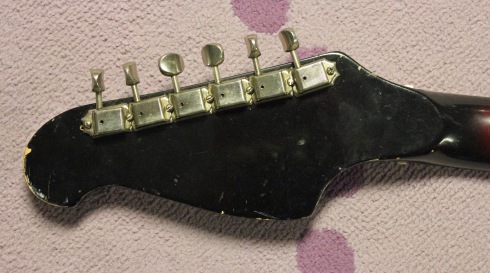 Tuners on this guitar were changed out, but we did get this guitar playable.  Believe it or not, the darn guitar sounded pretty good!  So whaddya think folks?  Do you have an answer to this mystery?

6 thoughts on “A Japanese Supro!?!? The Mystery Lexington Valco Guitar!!”