Here’s an interesting take on the classic Fender Tele, and I notice that currently Fender USA did a similar finish using this “burnt” technique.  But this Japanese made Tele finish right here dates from the late 80s to the early 90s.  This was during the most excellent Fujigen era, and the build quality is pretty darn good. 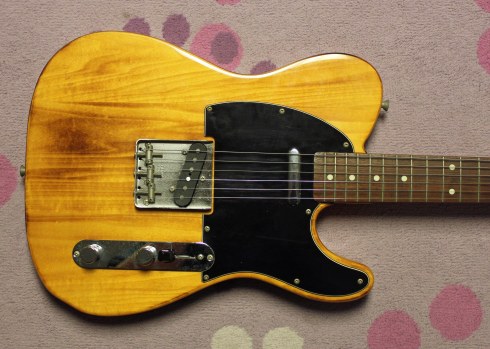 The “CCB” is the designation for this finish, called CharCoal Burst.  I’m not sure what they used to achieve the finish, but I remember when these came out in the early 90s and I liked it immediately.  Twenty years later I finally found one!  That worn, dirty look always appealed to me with guitars and I really never liked playing brand new guitars.  So this one was a hit in my eyes! 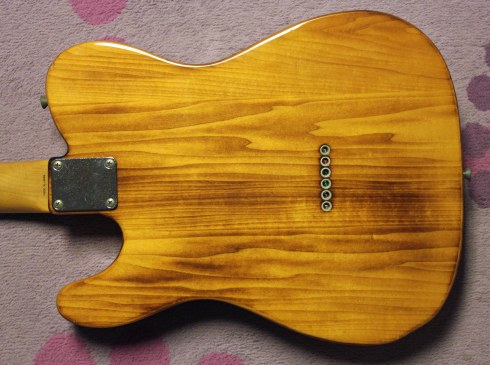 In the neck pocket and neck heel was the stamp and name.  This version was called the TL62-65, and this was also offered in a maple neck and that one was called the TL52-65.  Both guitars featured all the popular 1952 Tele specs, but the necks on these are thinner feeling and the bodies are American basswood, which is kind of a bummer.  I’ve never been a fan of basswood because the wood always seems soft to me and I’m constantly pulling strap buttons out of the bodies!  Maybe it’s just me?

Of course there are other differences like a vinyl pick guard rather than bakelite, but the pickups are decent sounding Alnico units and overall the guitar seems solid in the hand, so to speak.  The most interesting part of this guitar, and Japanese built Fenders in general, is the difference to what’s available in the USA and what’s available in Japan.  Like, this model was never made for sale in the USA so it make the guitar kinda valuable.  But in Japan, this model is like no big deal.  The grass is always greener! 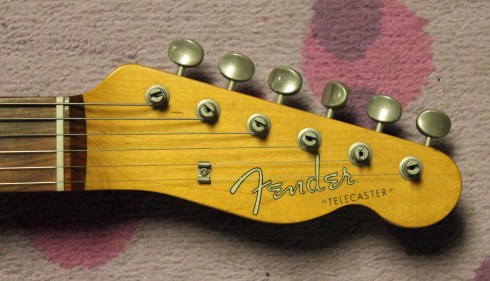 So there you have it…not vintage, not bizarre, and not really rare.  Hell, this is my first writing about a Telecaster.  I mean, there’s so much information out there and the Telecaster is such a utilitarian guitar that I don’t feel the need to go on and on.  I just wanted to share one of the cooler variations on this classic guitar.  I will say this…Leo Fender was really ahead of his time.  Not many designs have stood up to time and this was like his first foray into solid body electric guitars! 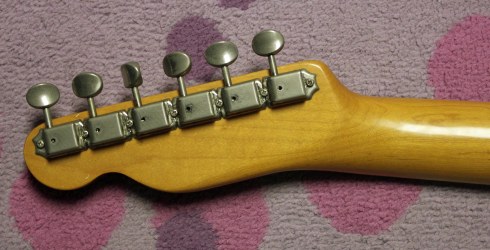