Oh yes folks, this guitar was really called the FINGER TALKER!!!!  Oh boy…. the folks back then were definitely creative when it came to naming guitars.  It’s like they gave simple designations like “J3” or they came up with crazy names like the “Beat Blaster.”  There seemed to be no middle ground.  And the same could be said for a Telecaster.  You could shell out the few hundred for a actual new Fender Telecaster or you could pay around $100 for something like this Japanese made Tele.

And what a time warp this guitar turned out to be!  Check out the old Rolling Stones sticker lovingly placed on the bridge cover!  Speaking of bridge covers, these are ALWAYS missing but it’s nice to see a complete example like this.  I always looked at the Telecaster design and wonderfully utilitarian and man, Leo Fender really aced this early design.  It’s tried and true and basically unchanged for over 50s years.  Japanese copies like these were all the rage in the early 70s and there still seemed to be a market for these guitars.

Notice how the pickups are the same in the bridge and neck positions.  A lot of players would scoff at such an anomaly, but really if you give these National Teles a chance then you’re in for a really good sounding guitar!  These pickups really cook and almost always read out in the high 5k range.

This particular example had a sticker on the back that read “TC51”, which was the manufacturer’s model name.  These appear with a few different brand names but I always refer to these as National Teles because it seemed to be the most common brand name affixed to the headstock.  It’s interesting to me that the TC51 designation probably referred to this model being an early copy of a 51 Telecaster, which is way before anyone at Fender or CBS probably realized that the early Telecasters were done right and simply great.  These Japanese made examples are like the first “reissues”!!

The necks on these are nicely contoured and have a slab of maple (or something similar) glued to the top of the neck.  I’m not a wood guy but I guess that’s Sen wood or something similar to mahogany.  I dunno… you can argue the finer points of wood in the comments section below.  What I do know is these guitars have a minor cult following and I always see these sell quick.  Even this one sold quick, and after owning a few I realized these are just nice old examples of how the Japanese were quickly learning what made a good guitar. 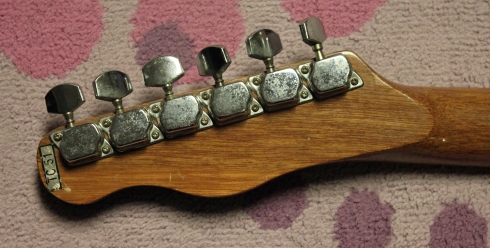 I’m not exactly sure who made this guitar, but I suspect it was Suzuki Violin in Kiso, Japan. Not 100% sure, but that factory seems to be the best candidate.  Either way, if you’re on the lookout for something vintage and quirky, grab a Finger Talker!!