So why do I mention Lou Reed and Sterling Morrison in the title?  Well back when I sold this guitar I listed it on eBay and it sold in like 15 minutes!  The guy who bought it from me said he’d been looking for this exact model for a while because it was the first guitar used in the early days of the Velvet Underground.  Sure enough, when you dig around the net for images, you can see this exact model being used by the boys.  Check out Sterling here and this pic here. 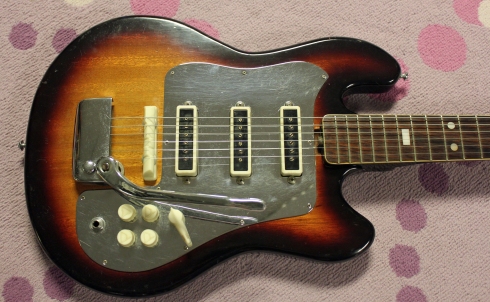 I have to give Sterling credit because this is one of the finer sounding Japanese imports from the era.  Made by Tokyo Sound/Guyatone, these guitars can always get good sounds coaxed out of them.  Pricing at $120 in 1965 money, these guitars came in at the mid to lower price range for a new electric guitar.  The pickups are robust and the tremolo system works really well.  This model sort of became a standard here in the USA, and Kent guitars were extremely popular from 1963-1966.  Afterwards the entire Kent line changed and Guyatone began to suffer from the electric guitar market crash.

These Guyatone Kent guitars always used solid wood construction and were good beginner to intermediate players for the time.  Of course the neck angles were never really right, but for the average garage band rocker these guitars were a perfect fit and affordable too.

There are many fans of Guyatone guitars out there, and in Japan players often found themselves in two camps… Guyatone or Teisco.  Similar to Fender and Gibson fans here in the states.  There were TONS of Kent guitars imported to the states during the mid-60s so the current prices have remained relatively low and these guitars can offer a cheap way to get introduced to Japanese coolness.

These Copa guitars were offered in a few different colors but are rarely seen. Sunburst models like this one are common, but there are some Copa guitars floating around out there in red, blonde, and cocoa-tan!  Some even came equipped with a cool “Kent” engraved tremolo!