So would you look at this beauty below!  Man, I found this guitar on a local Craigslist ad, and I never seem to find anything like this cool on Craigslist.  So, this Broadway Special was already unique to me.  Before finding this guitar, I started discovering all sorts of information about the Firstman brand and Japanese electric guitars from a really great guy named Kazuo Morioka.

I first discovered Kazuo through a blog he had in Japan.  He used to post all sorts of information about his life and music and whatever else he thought about.  Mostly he would be defending himself against Japanese Mosrite fans because when Semie Mosely went to Japan he met up with, and agreed to produce Japanese Mosrites, with Kazuo.  Kazuo was the first, and maybe only officially licensed producer of Mosrite guitars in Japan.  Kazuo was also very good friends with Nokie Edwards who I got to meet. But these are stories for another time.

The abbreviated version of Kazuo’s life went a little something like this… He was born into a very wealthy family in Japan who’s main business was pharmaceuticals.  I think the company name was Astrelia or something similar.  Anyway, Kazuo turned out to be a musical prodigy at a young age and turned away from entering the family business in order to pursue a career in music.  He first worked for Kawai around 1960 and then was one of two sales managers for Teisco.  I believe he was responsible for the western half of Japan, and he owned a large music store as well.  The guy was also an electronics genius, and he created the first electric organ in Japan.  In fact, it was with Kawai where he met his wife.  Kazuo and his soon-to-be-wife were the only two people who could really play the organ in those early days.  His wife was a truly wonderful soul, so sweet.

So when Teisco was sold off to Kawai in late 66, early 67, Kazuo stopped working for the company and tried his hand at an instrument company that he dubbed Firstman.  This Broadway Special was a somewhat tame offering compared to the truly bizarre Liverpool guitars!  Kazuo was somewhat famous in Japan and had many friends in music and show business.  This particular model was co-designed with a famous actor in Japan who was also a musician named Isao Bitou.  This model features really nice sounding pickups and a truly great tremolo that is a dead on Bigsby copy.  The pick guard, deep body, angular cutouts, and the headstock shape were all unique for the Broadway.

This was a mass-produced model, but the cool thing is Kazuo always had the initial prototypes all hand-made.  But this production model is still really well-made and just sounded great.  It also features that hidden neck joint that was common with many late 60s Japanese hollow body electrics.  My example was missing the white plastic cover. 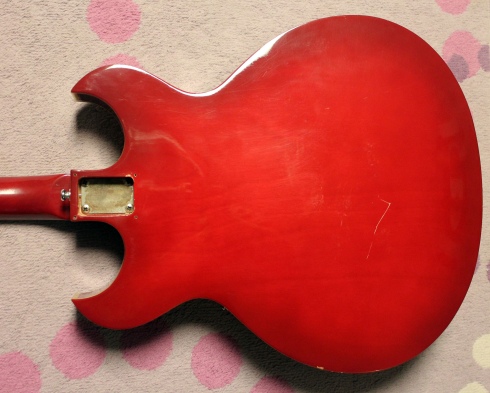 The Firstman guitars were only produced from 1967-69, and even though I used the words “mass-produced” there weren’t many Firstman guitars made relative to other guitar makers of the time.  I was able to find out all this information from the man himself!  Kazuo spoke perfect English and even lived near Seattle for many years where he owned and operated an upscale restaurant.  He and I exchanged emails for many years and in 2013 I even got to meet him and spend the day at his beautiful home in Yamanashi Japan.  He had a log cabin in the mountains, and I felt like I was in the northeast United States!  I have pages of notes, photos, audio recordings and videos of my visit with him.  Folks, the guy had a memory like you wouldn’t believe, and he was honest which made him an excellent resource.

Really, I liked him immensely but felt sort of sad because he seemed to be forgotten by time and his contributions to music were sadly undervalued, even in Japan!  But he didn’t seem to mind.  The guy was pleasant and happy.  I knew he had battled cancer for many years but we still exchanged emails up to the end.  In one of his last emails to me he said plainly that “the doctor visited today and told me that I only have a few remaining days.”  His wife had recently passed and he was preparing for the end.  He was a devout Christian blessed with the gift of faith, so he wasn’t worried at all.  He was gathering his things and getting rid of possessions.  He said “The completion of life is important too.”  I always remembered that.  We only exchanged a few more emails after that, but he was still writing long stories to me about Japanese guitar history and funny stories.

I think all too often, the stories of the people behind these guitars are as important as the guitars, and I truly love the stimulation of making these connections across cultures and generations.  Getting to know Kazuo was a great experience, and I feel lucky about it.  When I returned to Japan in 2015, I got to meet his daughter and we had a wonderful time exchanging stories and memories about her dynamic father. It was a little sad that Kazuo and his wife weren’t there to see the completion of my book, but I tipped a drink in his honor and made the long trek back to the states a few days later.