The Imperial Accordion company in Chicago really imported a lot of electric guitars during the 1960s, and this company always seemed to include guitars from Italy and Japan.  They were an equal opportunity importer!  I’ve seen guitars made by Galanti, Kawai, Teisco, Crucianelli, and Fujigen all included in the same catalogs and all carrying the Imperial brand name!  That’s the way it was back then folks… electric guitars were so popular and American companies simply imported guitars they liked, or guitars built by companies where a relationship had been established.

It’s interesting to point out that the Imperial Accordion company simply shifted its focus from accordions to electric guitars as players’ tastes changed.  But for this article I’m going to focus on the 1967 era Fujigen made electrics.  I’ve never seen these exact guitars in any catalogs, but they were some of the cooler Japanese designs from the time.  These guitars came in a few different configurations, including a two-pickup model that’s very important to guitar history! 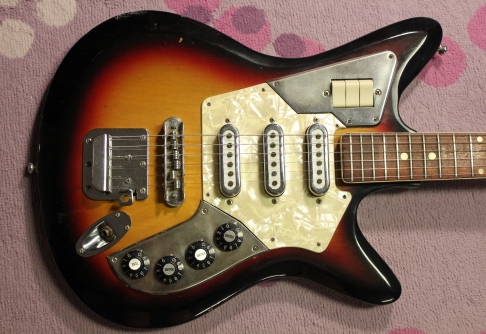 The basic design of these Imperial guitars can be seen here in the most commonly seen three pickup model.  The sweeping headstock, the short horns, the slightly offset body design, and the famous early Maxon pickups can all be seen here.  Additionally, all the typical Fujigen build characteristics can be seen in this particular model.  These are total surf guitars, with a lo-fi 60s sound that really can’t be replicated with any other current guitars.  Also check out the recessed jack, a la Fender!  Fujigen had just opened a new factory in the mid to late 60s, and these guitars were some of the first guitars to be produced there. 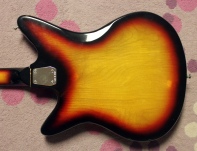 Now this model above is probably the rarest of the bunch and this guitar now resides at the Ikebe Gakki Live Music Bar in Tokyo, Japan.  This four pickup model is just not seen much anymore.  In fact, I’ve only seen two of these and I bought them both!  Back in the day I just couldn’t help myself!  But anything with four pickups was just so cool to my eyes… kind of like a work of extreme art.  Anyway, the owner before me used this guitar in a surf band and then I did the same thing when I bought it.  Fujigen always used good wood for the bodies and necks, but the frets were really flat and tiny and these usually need some work to get them playing properly.  A re-fret does wonders for these guitars!  Also notice how these guitars were only available in sunburst?  There might have been other colors, but I’ve never seen any. 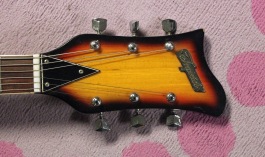 Now this two pickup model above isn’t the rarest of the bunch, but it is historically significant because it features a built-in fuzz circuit!  I know that this guitar is the earliest  Japanese electric guitar to have a transistor fuzz effect in the guitar!  Tokai soon followed with their own fuzz in the Hummingbird 230, but Fujigen was the ground-breaker here!  This particular guitar now lives in the Fujigen factory museum in Nagano, Japan.  Yuichiro Yokouchi was the founder of Fujigen, and his sons have carried on the tradition of making electric guitars.  The Fujigen factory still makes very fine guitars, and they have really embraced their history after many years of making guitars for other companies in the OEM market.

After talking with the folks at Fujigen, the idea for a built-in fuzz came from someone within the Imperial company here in the states.  The circuit was based loosely off the Gibson Maestro fuzz that was used famously by Keith Richards and the Rolling Stones on the song “Satisfaction.”  There weren’t many other fuzz circuits at the time, and this is one of those buzzy, trebly sounds that really works for raw, garage-type music… or of course a dirty boost.

The circuit was designed and built by Toshihide Ushimaru, who actually still works at Fujigen!!!  He started working for Fujigen in the mid 1960s and is really an electronics genius.  The simple circuit operated on a AA battery accessed from a plate on the back of the guitar.  Ushimaru san is very typical of the people and employees I met in Japan… just super nice, gracious, and humble.  These guys never fully realized their contribution to guitar history and always seemed genuinely surprised by my interests.  But really I feel it’s time to introduce their efforts to the guitar playing public.  Hell, if I don’t write about these folks then no one else will!

Check out all the demos below for an idea of the 1960s “Fujigen sound,” and be sure to listen to the fuzz sounds of the two pickup guitar.  These guitars weren’t really built in large numbers, but were distributed throughout the USA and can be found occasionally here and there.

By late 1969, Fujigen had exited the electric guitar market in the USA and focused more on the Greco brand in Japan.  Fujigen then went on to make some of the finest electric guitars in the world and by the late 70s, they were producing some serious Ibanez branded guitars to be found in the USA.  Of course most folks know about the Fender connection with Fujigen, and how Fender chose the Fujigen factory to produce thousands of guitars throughout the 80s and 90s because the quality of the product was so good.

One thought on “The 1967-68 Imperial Fujigen Electric Guitars!”