Skip to content
Posted on November 18, 2011February 15, 2014 by drowninginguitars Posted in Guitars

(Scroll all the way down for the video demo!!)

One of my true guitar loves are the awesome electrics that emerged from Italy during the 1960s.  This guitar is unbranded, but some nice folks on the fetishguitar Facebook group clued me in that it was most likely made in Castelfidardo, which was the area that produced the Bartolini, Gemelli, Morbidoni, D’Scala, and Carini (and others!) guitars.  I checked out the fetishguitar site and found a few guitars that look very similar to mine, especially this one attributed to Carini.  There’s also a chance that Morbidoni made this one.  Apparently, the headstock shape is pretty common too.

After posting some pics to Facebook, I was able to get some good opinions.  People, there are others out there like us, and it just amazes me that for so many years there was simply little opportunity to connect!  It’s so easy now!  There are super knowledgeable guys like Cameron MacLean, Stefano Aria, and Alfredo Bartolini, that I would have never had the pleasure of talking with if it weren’t for these social network sites.  I’m amazed at the simple things in life!

Anyway, one of the coolest things about Italian guitars, aside from the creative designs, are the pickups.  Often, Italian electrics from the 60s used mini-humbuckers that just smoke!  Seriously, I’ve heard many Italian pickups that blow away vintage Gibson mini-buckers, and I totally realize the weight of that comment!  I have a favorite saying, and it goes like this: “it’s what is.”  In other words, it’s the truth!  Another truth is that some of these Italian guitars look MUCH better than they play, but some of them are total monster sleepers! 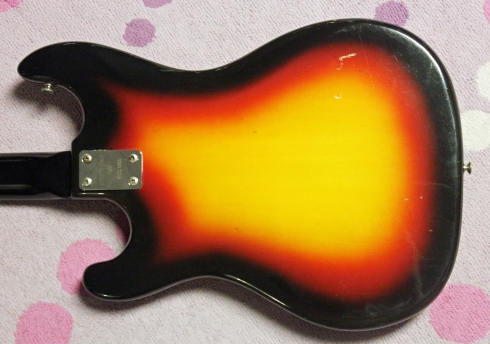 OK, enough opinion, let’s talk some facts about this guitar!  When I got this guitar the pickups were a little microphonic and weak sounding.  One reason is that the factory used 50k volume pots which really choked some of the output and sound.  Dano put replaced them with 250k pots but left the tone pots since they were already 250k.  The pickups are pretty strong and read out at 6.57k for the bridge and 6.44k for the neck.  Dano also wax-potted the pickups for more silent operation.  It’s really amazing what a simple $6 pot can do for a vintage guitar!  And with the wax potting, now the guitar just sounds superb!

Another interesting aspect of this guitar was the truss rod.  For the first time ever, Dano and I saw a guitar with a truss rod cover/access at the back of the headstock!  In fact, it was one of the best working truss rods we ever came across.  It just worked great! 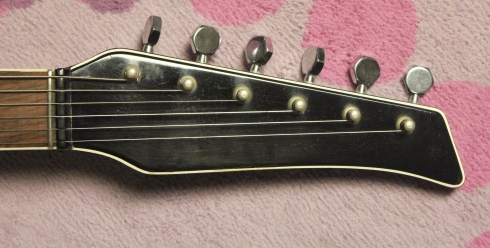 The wiring was very clean, but the output jack needed to be changed (it was marked LESA 50k Made in Italy).  The controls are four knobs (volume and tone for each pickup), and an on/off switch (a little weird) for both pickups.  The bridge and tremolo work very well and because the tuners are pretty high quality, the guitar keeps a tune.  The bridge cover is also really comfy!

The frets were very tiny and the fretboard had plenty of humps and bumps.  After a quick scan of the neck, Dano saw a pretty huge dip in the neck at the 12th fret, high e side.  All this was remedied with a re-fret, and combined with a neck angle that was pretty good (there was already a factory shim), the action is now low and even all up and down the neck.  It plays very easy.

The guitar is very lightweight, and the body is probably made of poplar.  I had another guitar a few years ago that I sold on ebay (I really miss it too!) and my pics were used on the fetishguitar site here.  Those outdoor pics were in my old backyard!  The fetishguitar guys identified it as an Ariston Capri 3V.  My old Ariston guitar had the same type of pickups but I sold it in 2007 because it was kinda’ noisy.  Now that I know the secrets, I wish I had it back!  If you own it, consider selling it back to me!!! Here’s a pic of the Ariston body…

The Ariston was also a Castelfidardo made guitar and had a similar neck plate.  Once again I’d love to hear opinions and observations!  I’m not an expert on these guitars, but I know there are some of you out there!  Lastly, here’s the video demo of this monster guitar! Notice how Mike has to use the volume knobs to switch pickups?  The only switch on this guitar is a simple ON/OFF!